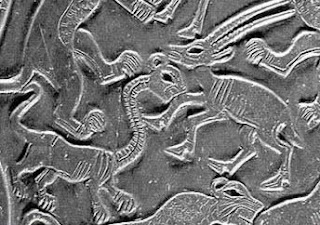 I have always been intrigued by the Egyptian depictions of monsters. They are found everywhere on ceremonial slates, plaques ,knife handles, inside tombs particularly at  Hierakonpolis and Naqada in . These are early depictions and include winged griffins and what looks like leopards with long, winding necks (see photo) . They are thought to be inspired by models found in . What if the images were also inspired by travellers and their stories? The long winding neck creature reminds of stories from other parts of of prehistoric looking creatures such as Mokele- Mbeme.
There are also modern monster stories from , such as the strange carcass washed ashore in 1950 called the  Ataka animal because of the place it was found. 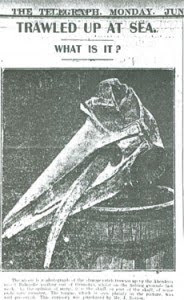 In January of 1950, following a gale, which raged along the banks of the , Egyptian authorities discovered huge carcass decomposing on the beach. A team of scientists were sent to try and identify the carcass.It was described as the size of a whale with two  huge walrus-like tusks, which protruded from either side of its large mouth. There was some evidence of a blow hole but no apparent eyes and a row of cilia like appendages circling its maw.
This led some to speculate that the animal may have been an unknown species of marine mammal. Eyewitnesses, at the time, claimed that there was  a large, whale-like creature swimming in the gulf just ten days before the storm. Experts could not positively identify the creature at the time , which seems odd considering that in modern times it has been dismissed as a Baleen Whale. Surely marine biologists in the 1950s knew what a Baleen whale looked like? The appearance of "walrus-like tusks" on the Egyptian carcass have been said to be the lower splayed jaws of the whale. Surely the experts in the 1950’s would have realised if it was a whale carcass , even decomposed. It has been a matter of speculation for years and there is no definite answer. So another Egyptian mystery.
.
Posted by Tabitca at 03:43

I've done in the past a deeper research in the case of the so called 'Ataka-Carcass'. And so I can say (and others like Darren Naish or Marcus Bühler too) there is a definitive answer! Although the identification is possible for everyone with some knowledge in biology and whales some of the unfortunate first "expert" assessment seem to count for some more than the listed characteristics. Unfortunately this is based on an inadequate level of knowledge and I will show you why.

The “tusks” can easily be identified as lower arches of a baleen whale. The lower jaw of baleen whales (Mysticeti) consists of two long, rounded arches and where the toothless bones come together (in the symphysical-region) they are not linked. Injured through a collision with a ship (one account of such an unfortunate incident only few days before is listed) these lower arches “break” and create the impression of protruding tusks. The "cilia like appendages" can easily be explained as nothing more than the flesh of the head or the throat.

On a picture of the carcass with a good resolution can be detected that there are two blowholes instead of one as mentioned elsewhere.

Contrary to the view of the carcass to have no eyes there are “very small eyes on the remains of what were apparently fins” mentioned in a press release. Please see for yourself who you can find the eyes in Bryde’s whale (and other cetacean species) and you find that in the picture the eyes are simply obscured by the “cilia like appendages”.

A specific feature of the upper side of the carcass enables to identify the species. On the head you will see three elongated ridges leading from the mouth up to the blowholes. The median ridge is wide and even at lower resolutions relatively clear viewable, while the two side ridges are only visible at close range or at higher resolution. Through these specific feature one can safely identify the carcass as a Bryde’s whale (Balaenoptera brydei).

The experts couldn't identify it? This isn't true as I indicated above. In fact the identity remained for the Egyptian scientists not long a mystery. Beginning with 14 January 1950 you will find in the press-archives that the Egyptian experts were in agreement and the corpse could be identified: it was nothing more than a young whale with a prominent “broken” jawbone from a fatal wound he suffered! You also will find this whale listed in
Laist, D. W., A.R. Knowlton, J.G. Mead, A.S. Collet und. M. Podesta. (2001). Collisions between ships and whales. Marine Mammal Science, 17(1): 35-75. Table I. Records of collisions between motorized ships and whales prior to 1951: Bryde’s whale. killed. tanker. Red Sea, Egypt. Anonymous 1950.

For further informations you can do a translation (for example with Google on the left menu-site) of my article regarding this case: Ataka-Kadaver

BTW your picture of a skull is (if I trust Darren's article about rorquals part II) published by the Telegraph on 29th June 1908 and not from the carcass of Ataka. Instead the skull was "trawled up by the Aberdeen vessel Balmedie (sailing out of Grimsby) and thoughth by the article's writer to be that of 'some prehistoric monster', apparently with tongue preserved. It's clearly a rorqual skull [...]" As far as I know the only picture existing of the Ataka-Carcass is the one I've included in my article.

Thank you for your comments Markus. however as none of us where there at the time to take samples and measurements, all we have is scientific conjecture based on old photos.

Sorry but an old photo is more than enough to identify this carcass. Show the picture to any zoologist with knowledge in whales and he will also give you this identification. But beside that there were scientists at this time at the carcass and (finally) they identified it as whale! Beside that this carcass is listed and accepted in scientific literature. What more you need to de-mystify a carcass? It's false to hold on a mystery where no mystery is. Move on. For cryptozoology.

In view of your health and your goodbye I wish you all the best for future. I've enjoyed your blog very much.