Morgawr, is the Cornish name for the “sea monster”  reported being  seen off the coast of that county since the 1800s.It has been described as being  seen as having  humps with 'stumpy horns' and bristles on its long neck  and about 20feet(6.6 metres) long
In 1876 some fishermen reported they had netted a sea serpent off Gerran’s Bay . It was dismissed by many as just a tall tale. Then in 1906 a sea serpent was reported as being spotted off the coast of .
In 1926, another fisherman reported catching something in his nets. This was described as being 20 feet (6.6metres)  in length , with an 8 feet (2.6 metres) long tail, scaly legs and a beak-like head. ( N.B. it could have been a carcass of a shark or another known sea creature)
The sightings have continued in more recent  times:
In September 1975 off Pendennis Point ,two witnesses a man and a woman out on an evening stroll.,claimed they saw  a humped figure with 'stumpy horns' and bristles on its long neck, catching a conger eel in its mouth. Again in 1975, it was spotted in the Helford, near Durgan.

Then in 1976 some extraordinary photos appeared. Firstly two separate sightings off Rosemullion Head took place in January 1976 one of which was by two women from , on holiday. They  described what they saw as being as being 30-40 feet( 10-13 metres) long and looking like a prehistoric creature. In February of that year a lady known only as 'Mary F' sent two photographs, apparently of Morgawr, to the Falmouth Packet, along with a covering letter. She claimed they were taken off Rosemullion Head Falmouth and  described the creature as :"it looked like an elephant waving its trunk, but the trunk was a long neck with a small head at the end, like a snake's head. It had humps on its back which moved in a funny way... the animal frightened me. I would not like to see it any closer. I do not like the way it moved when swimming." adding that it was black or brown in colour and had a head that looked like a sea lion's .Neither Mary F or the negatives have ever been traced.
In July 1976, 25 miles south of Lizard Point, two fishermen John Cock and George Vinnicombe claim to have seen  a creature whose neck "reared 4 feet( 1.3 metres) up in the water". They estimated the animal's length at 22 feet.( 7 metres) . A young family also spotted something  in the Helford in the same month. Later that year  a couple in their motorboat witnessed two large mottled-grey humps off Restronguet Point and another man described seeing a creature like a huge  eel estimated to be 50-60 foot( 16-20 metres) long with a humped back from Gyllyngvase Beach. In November 1976 off  Parson's Beach, Mawnan Tony 'Doc' Shiels claims to photograph the creature lying low in the water. He mentions "little stumpy horns" on its head, and he describes the body of the animal as 15 feet long. He was accompanied at the time by a journalist, who also said he saw it.
IN  August 1985 off  Gerran's Bay( where the 1876 capture in nets was) Christopher and Susan Waldron of King's , Gloucestershire whilst on holiday, report  having seen a strange  creature. Mrs Waldron was watching her husband swimming in the sea, when she noticed a large silhouette under the surface behind him. The shape was described to be that of a large, long necked creature, although it was in shadow.
In 1987, and some 50 miles east along the coast at Devils Point in Plymouth, Devon, an experienced diver sighted what he described as a dog-like head that rose 3 feet (1 metre)  out of the sea, although the area is an area favoured by conger eels.
In January 1992, a couple walking along the cliffs in saw a creature, which they described as looking like pictures of the Loch Ness Monster. They were very sceptical about previous sightings before witnessing it for themselves.
That brings us up to 1999 and Gerran's Bay again where  John Holmes videotapes what is claimed to be an unidentified creature in the sea. See newspaper article and still below. 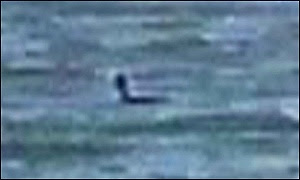 A distant relative of Scotland's famous Loch Ness Monster could be lurking in the waters off the coast of Cornwall, it has been revealed.Video footage of a creature swimming in the sea off Gerran's Bay has been captured by local man John Holmes and has confounded experts.The 49-year-old from Sticker had been filming his wife swimming in the sea when he spotted what he described as a "snake-like" creature.On Thursday he told BBC Radio Cornwall: "I was filming my wife and had climbed on a rock to admire the view across the bay and I thought I heard a splash."A bizarre movement caught my attention about 250 metres off shore and this thing appeared to be standing about one metre above sea level."Mr Holmes thought he was looking at the fin of a shark or a killer whale at first."I then saw a snake-like head and neck which appeared to be raised out of the water. I was so shocked by what I saw that I almost fell off the rock."I screamed to my wife and she climbed out of the water. I only saw it in the water for a brief amount of time."The video was taken in August 1999 but has only just been released by Mr Holmes because he feared he would be ridiculed.Video expert Tim Farrow, of TJF Productions in St Austell, has studied the footage with a forensic scientist and has confirmed that it is "100% genuine"."This footage has not been doctored in any way," he said."The images are genuine and the video is genuine. It shows an animal type object in the sea."I don't know what it is but I have never seen anything like this before. There has to be an explanation but at this moment in time, I don't have one."Mr Holmes, who worked for the National History Museum in London for 19 years, has his own theory. "I have gone through all the text books to try and work out what this may have been and my theory is that it could be a living fossil."It appeared bird-like at times but was very uncharacteristic of any diving birds."I really do think there is some sort of zoological discovery around the coast of ."
Source: http://news.bbc.co.uk/1/hi/england/2070000.stm
One mans story of an encounter in 1944: http://www.mevagissey.net/monster.htm


It seems strange that the video should only be released  three years later as if he was going to be ridiculed , the year would not have made any difference. It may be he was going to retire so it didn’t matter if his employers knew about it. I don’t know, an odd thing to do. The photos, as usual, are inconclusive and the descriptions vary slightly. However  that is what would happen if you questioned eye witnesses about something they had seen( ask any detective) the descriptions would vary, sometimes enormously so, I would be suspicious if they didn’t. One would assume fishermen and locals would know what they were looking at and be able to identify basking sharks, seals etc, though out of area people from towns may not. So what do you think, mistaken identity, unknown creature or prehistoric relic?
Posted by Tabitca at 03:29

Morgawr the Cornish monster is similar to Nessie of Scotland, Champ of Lake Champlain, and the Lukwata of Africa's Lake Victoria. All three of these cryptids have a long snake like neck. The Plesiosaur is a likely candidate for the identity of these long necked lake monsters.
These long neck lake monsters and sea monsters could be any number of things, such as some kind of Eel, or some kind of Dolphin or Whale, or some kind of seal, a snake, a lizard, or an unknown mammal in an order of its own or an unknown reptile in an order of its own. All are dangerous and potential man-eaters and manipulate. The Lukwata is probably the most dangerous, and is known to kill and eat crocodiles and known to overturn boats and to grab anyone in it. It's wise to stay out of the water. It's best to use drones with cameras and underwater cameras to record these unknown animals.

Thats interesting....
I hesitate to describe the two 'things' I've seen as monsters;but they were unusual,quite eerie and seem consistent with other eye-witness accounts.
The first was seen in the Sound of Sleat (Skye). This is a very deep sea loch. It was a clear bright morning in later summer 2003. From a distance of about a 1/4 of a mile, I saw a large dark 'horse-like' back moving slowly through the calm water. Hard to judge its size;but I would say it was at least 30 feet long and about 4 feet out of the water. I'm not saying it wasn't a whale. But it was very close to the shore, very still and quiet. The sighting lasted about 5 mins.
The other sighting was also in 2003, in castle Urqhart bay at Loch Ness. I was
On a coach which was idling in the castle carpark (heading for Fort William). I was staring out at Urqhart bay and something appeared suddenly on the surface. Hard to judge distance from shore, but it was black and appeared to have a long(ish) neck and must have been fairly big. No other features were visible and the sighting was brief (about 30 seconds).
I recommend "Lake Monsters & Sea Serpents of the British Isles" by Paul Harrison and "The Field Guide to Lake Monsters and Sea Serpents" by Lauren Coleman and Patrick Huyghe.