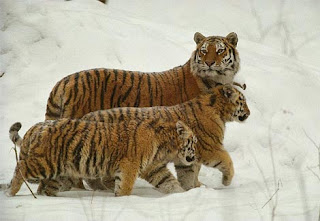 There has been a sighting of a big cat in Kent and a footprint found. More details see the link below.

and in the Lincolnshire wolds
http://www.dailymail.co.uk/news/article-1138110/Do-huge-paw-prints-s


Another print was found in the snow and a big cat seen in Sleights near Whitby in North Yorkshire.
I used to live in Sleights and our house backed onto fields and it was surrounded by country a big cat could survive in. It's not that far from Scarborough where there is a Zoo/ theme park. it is possible that a big cat escaped at some point but it wasn't reported or perhaps not noticed and is living in the area. However it is also very cold there and has been cut off by snow before. The question is would a cat from a warmer climate survive in the snow? There are lots of farms around the area and barns to shelter in. I would have thought though there would have been reports of sheep being attacked. An interesting one with lots of Hows and whys? How is it surviving and why is it staying in that area? Why has it not been seen more often and why no reports of sheep being attacked or hen coops being raided? Maybe some more reports will surface to answer those questions. Time will tell.
Posted by Tabitca at 00:45