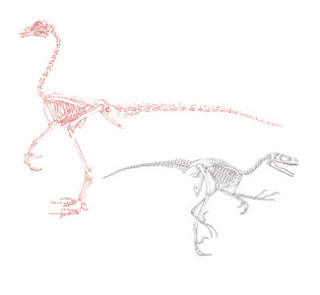 Who needs dino DNA? A few tweaks to a chick embryo may be all it takes to grow a chickenosaur (left) that resembles and early raptor (right).

The goal, in the end, would be to steer the embryo down the path it would have gone if it were something like a very early coelurosaur, a dinosaur grouping that counts tyrannosaurs and velociraptors among its members. If the genes in the chick embryo are very close to those of an ancestral, nonavian dinosaur—and if the changes, over more than 150 million years, have been almost all in regulation of the genes—then we could reactivate the old pattern of regulation.

We don’t have to give the embryo new genes, just adjust the growth factors and other chemicals that direct development. And by doing that we can see what must have changed during evolution, and what the old pattern of regulation was. If we learn enough, this will give us enormous insight into the fundamentals of biology, development, and evolution. It will also be the first step in growing a dinosaur.See rest of stort here:

News of attempts under way to grow dinosaurs seem more feasible each day.Lets hope they heed the warnings in Jurrassic park :-)