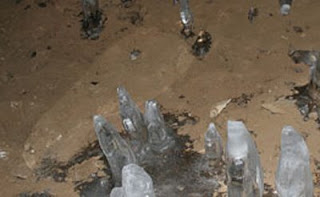 The article below says the university expedition found footprints in the cave the Yeti(s) are supposed to have been seen. contains photos.

As the leader of the expedition points out ,a single Yeti would be nonsense ,there would have to be a family group at least. Sensible man that. Too many talk of single entities in the cryptozoological world. It would only be feasible if they were the last of their kind, the rest having died out. That however cannot be the senario in every case. Will keep following this story with interest. Maybe it will only be a group of tramps living rough but at least it is getting investigated.
Posted by Tabitca at 03:04