This is not really cryptozoological but a bit of fun for Halloween.The Scientists argue do vampires exist?

You can put away the garlic. The principle of geometric prog

ression has just debunked the myth of vampires .Who needs ghostbusters when you've got Newton, says a scientist who has used physics and maths to poke holes in the way Hollywood depicts ghosts and vampires.In a paper, published recently on the physics website arXiv, theoretical physicist Professor Costas Efthimiou of the University of Central Florida shows that when it comes to things supernatural, the figures just don't add up.For instance, the ability to walk through walls is a common talent of celluloid ghosts. But Newton's laws of physics suggest that if a ghost can walk it shouldn't be able to pass through walls, say Efthimiou and Cornell University postgraduate student Sohan Gandhi.Newton says a body at rest will remain at rest until it's acted on by an external force and for every action there is an equal but opposite reaction. So in order to walk, we apply a backward force on the floor with our feet, propelling the feet up and us forwards. But if a ghost can walk through walls, it must be "material-less", the authors argue, and incapable of exerting force. By the same token, a ghost that can walk through walls should also sink through the floor, and a ghost that can walk should be bouncing off the walls it tries to pass through ."The depiction of ghosts walking contradicts the precept that ghosts are material-less," they write. Sharp drops in temperature are also associated with the arrival of a ghost. But the paper says physics, which suggests that a sense of cold is correlated more to the rate at which heat is transferred from bodies to the environment than actual temperature, can provide an explanation. What do you mean says we can't walk through walls? ."It has become almost a cliché that the entrance of a ghostly presence be foreshadowed by a sudden and overwhelming chill," they write. "This feature of supposed ghost sightings lends itself naturally to physical explanation." Efthimiou and Gandhi say when a warm object is placed next to a cold object, energy flows from the warm body to the cooler body, cooling the warm body. In a room with a high window or a door with a gap, the cool air from outside displaces warm air inside, creating a system of heat cycles and eddies. The effect is increased because humans are more sensitive to rapid changes in temperature even if the absolute change is small. A 2001 investigation of the famous Haunted Gallery at , by the 's Dr Richard Wiseman, found that hidden doors were letting in draughts. This produced a combination of air currents that caused temperatures to plummet up to 2°C in some parts, the paper says. Efthimiou and Gandhi also use the mathematical principle of geometric progression to rule out the existence of vampires. They argue it would take just two and a half years for vampires to wipe out the entire human race from the day the first one appeared, based on the myth that vampires turn their victims into other vampires by sucking their blood. If vampires feed once a month, the great grandaddy of all vampires would have killed one human and produced one vampire in the first month. So in total there would be two vampires and one less human, or a tally of vampires 2, humans -1. By the next month, the 2 vampires would kill 2 humans, and so on. After n months there would be 2 x 2 x 2 ... x 2 = 2n, or a geometric progression with ratio 2."The vampire population increases geometrically and the human population decreases geometrically," they say.Using the principle of reductio ad absurdum, they conclude that vampires can't exist as their existence contradicts the existence of humans. Professor Alan Carey, dean of the Mathematical Sciences Institute at the , says the paper successfully debunks the depictions of the supernatural in the movies. "They poke holes in the clichés and mistakes that are made, and that's not too hard to do," he says. Source: http://www.abc.net.au/science/news/stories/s1725868.htm

However does that explain this:

A SKELETON exhumed from a grave in is being claimed as the first known example of the "vampires" widely referred to in contemporary documents. Matteo Borrini of the University of Florence in Italy found the skeleton of a woman with a small brick in her mouth (see right) while excavating mass graves of plague victims from the Middle Ages on Lazzaretto Nuovo Island in Venice .At the time the woman died 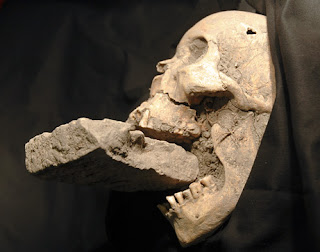 , many people believed that the plague was spread by "vampires" which, rather than drinking people's blood, spread disease by chewing on their shrouds after dying. Grave-diggers put bricks in the mouths of suspected vampires to stop them doing this, Borrini says.The belief in vampires probably arose because blood is sometimes expelled from the mouths of the dead, causing the shroud to sink inwards and tear. Borrini, who presented his findings at a meeting of the of Forensic Sciences in , last week, claims this might be the first such vampire to have been forensically examined. The skeleton was removed from a mass grave of victims of the Venetian plague of 1576.However, Peer Moore-Jansen of Wichita State University in Kansas says he has found similar skeletons in Poland and that while Borrini's finding is exciting, "claiming it as the first vampire is a little ridiculous". Borrini says his study details the earliest grave to show archaeological "exorcism evidence against vampires". Source:

So as all hallows eve approaches…what do you think? Do vampires, ghosties and ghoulies exist?