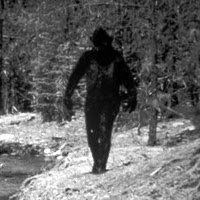 A hairy gorilla-like creature that resembles the legendary Bigfoot has been caught on camera in the back garden of a home in . The beast (not pictured) was snapped by amateur hunter Kenny Mahoney. "It looked like it had the outline of a head, and gorilla type shoulders, and then [it had its] arms crossed," the Daily Telegraph reported him as telling local news station WAVE-TV . "One of the explanations my brother-in-law said [was that] it may be [that] a garbage bag blowed (sic) up in there, but [looking at] all the smashed over vegetation in there, I really don't know. I have no idea what it is." The sighting is the latest in a run of recent encounters with ostensibly mythical monsters, including the Yeti, the Loch Ness Monster and a mythical goat-sucking dog. Ordinary folk have reported seeing extraordinary creatures. Monstrous liaisons have occurred around the world and here in the . One incident has even been caught on video camera Such stories clearly have nothing to do with the fact we have just been through the so-called 'silly season', where fantastical tales and implausible fancies are passed off by the media as hard news. And in any case, one glimpse at such deeply convincing testimony and indisputable photographic evidence would surely win over even the most extreme sceptic... wouldn't it?