Mazinaw Lake creature -monster fish or something else?

in Ontario is about 9 miles long about 0.6 of a mile in width. O

ne part of the lake is relatively shallow and the other portion dips down to abut 150 meters (approx. 470 feet). It is known for the Mazinaw Rock. This sheer rock face rises about 300 feet above , and features over 260 native pictographs .The lake is also said to house a monster . Some say it looks like an eel like creature over 20 feet in length.

The Indigenous native name for the creature is Mishipashoo. Legends say that a water spirit inhabits . The natives would offer tobacco 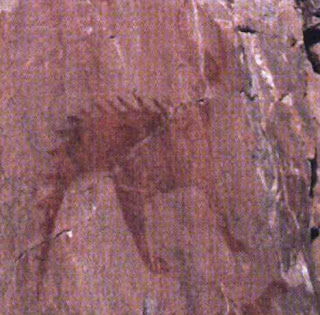 to this spirit before embarking on a journey across such waters. The tobacco was offered with a prayer to appease this spirit with the hope that it would not whip up its great spiked tail and tip their canoe. The pictograph I have posted here has a spiked tail and because of the way it looks has lead people to think dinosaur

One of the stories says that over a hundred years ago, a man named Andrew was at the lake with his family and he and his siblings were jumping from rock to rock along the sides of the lake. Suddenly, Andrew saw what looked like a huge fish. There were also some reports that people who saw this creature described it as a serpent. In 1977, a man by the name of Mont Woods, a county constable for Lennox and Addington working for the Ministry of Natural Resources, saw something like a large eel or sturgeon and later when pulling up nets one had a hole in it about 4 feet wide . The theory is that it is a large sturgeon at least 14 feet long, which is a monster in terms of size but would it have survived for over 100 years and if not what else is in the lake?