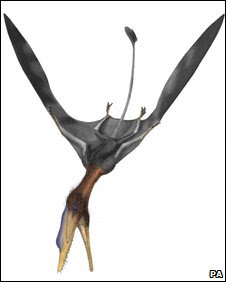 Researchers in and the say they have discovered the fossils of a new type of flying reptile that lived more than 160 million years ago.

The find is named Darwinopterus, after famous naturalist Charles Darwin.

Experts say it provides the first clear evidence of a controversial type of evolution called modular evolution. The 20 new fossils found in north-east show similarities to both primitive and more advanced pterosaurs, or flying reptiles. The research is published in the journal, Proceedings of the Royal Society B.Pterosaurs, sometimes called pterodactyls, were flying reptiles that flourished between 65 and 220 million years ago.

Until now scientists had known about two distinct groups of these creatures - primitive, long-tailed pterosaurs and more advanced short-tailed ones, separated by a huge gap in the fossil record. But the discovery of more than 20 new fossil skeletons in north-east could be the missing link in this evolutionary chain. Darwinopterus is a hawk-like reptile with a head and neck just like advanced pterosaurs - but the rest of the skeleton is similar to more primitive forms. Researchers say that this could be evidence of what they call modular evolution - where natural selection forces a whole series of traits to change rapidly rather than just one. With its long jaws and rows of sharp-pointed teeth, these creatures were very well suited to catching and killing other flying species.