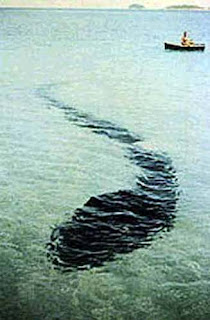 I was wondering if there was any connection between these sea serpents sightings in 1780 and the discovery of dinosaur bones the same year.

Excerpt from the log of the ship General Coole, around 1780: "A very large snake passed the ship. It was 3 or 4 feet in circumference. The back was of light color and the belly yellow." - S.H. Saxby, Master Mariner, Bouchurch, Isle of Wright.

In May 1780, Captain George Little of the frigate , in off the coast, had an encounter that was described in Bernard Heuvelmans’ book In the Wake of Sea Serpents:

. “ I was lying in Round Pond, in , in a public armed ship. At sunrise, I discovered a large serpent, or sea monster, coming down the bay. It was on the surface of the water. The cutter was manned and armed. I went myself in the boat. We proceeded after the serpent. When within a hundred feet, the mariners were ordered to fire on him. Before they could make ready, the serpent dove. He was not less than from forty five to fifty feet in length; the largest diameter of his body, I should judge, fifteen inches, his head nearly the size of that of a man, which he carried four or five feet above the water. He wore every appearance of a common black snake.”

In 1780 there was a discovery of an enormous fossil reptile in underground quarries near the Dutch town of . Nineteen years later, Faujas published a description of the reptile. He classified it as a giant crocodile. Today, the fossil is identified as a mosasaur, an extinct marine reptile. He wasn’t far wrong in his description.

Could Sea Serpent sightings and other reported cryptid sightings be influenced by finds of fossils ? Could thunderbirds have been reported after the fossils of flying lizards were discovered? It is just a thought that sometimes we ought to look at influences outside of sightings such as the media and folklore when looking at reported sightings of unknown animals. Sometimes there is truth in folklore and sometimes people see what they want to see. It is certainly something I will take into account when interviewing witnesses in future. It was always there at the back of my mind but a reminder is always a good thing.

Some sea serpent tales from the 1500’s onwards(can also be viewed in HTML through google):www.kouroo.info/general/SeaSerpentSightings.pdf