Rare film of Nessie from 1936 being shown 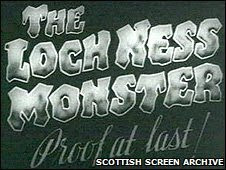 A 1936 film that claimed to show the first evidence of the Loch Ness monster is among rarely-seen archive footage being shown in later.

The material can be seen at Glasgow Film Theatre and the National Library of Scotland (NLS) as part of Unesco's World Day for Audiovisual Heritage.

It includes the 's earliest-known personal wedding in 1905 and actress Vera Reynolds visiting Glasgow in 1926.

A number of films will also be available on the NLS website.

The library currently has about 67 films available to see online, with plans to increase this to 100 in the next few weeks.

I accessed the film here: