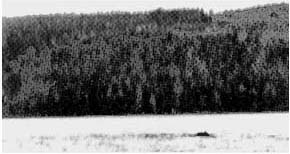 in is another lake that was brought into being during the ice age. It is about 300 feet deep. Stories of a monster called Storsjöodjuret have persisted for 400 years. There are said to be 200 documented witness reports from 500 people who have seen Storsjöodjuret. Many more have spoken of seeing something in the lake. It is described as serpentine and humped with large eyes.

In 1635, Mogens Pedersen from Herdal, wrote down the legend about two trolls who were boiling a mixture in a large kettle on the shore of the lake. When they had boiled the mixture for years and years, the contents of the kettle began to groan and wail and there was a loud bang. "A strange animal with a black serpentlike body and a cat-like head jumped out of the kettle and disappeared into the lake. The monster enjoyed living in the lake, it grew unbelievably large and terrorised the people living on the shores of the lake. After some time it extended all the way around the island Frösön, and could bite its own tail."

Then on October 31st, 1898 there was a report in the local paper, Jämtlandsposten ,about M.P. Jöns Bromée´s experience outside Billsta, Hackås in 1863: "...there was a large ugly monster in the lake and we decided to pursue it. Two shotguns were loaded and two boats equipped in haste. Meanwhile the monster had slipped away from the shore, into the water, and began to move slowly away. At that point, it resembled 10 or 12 shiny black anchors linked together and following each other..."

In 1920 Per Jönsson from Andersön said he seen Storsjöodjuret three times. In a recorded interview from 1960 he tells of an encounter outside Digernäs in 1920: "...I saw that big grey-green body between the waves. The water boiled around me. I saw that its tail was moving with powerful strokes. After a hundred metres or so it disappeared without a trace. A few days later they saw it from the peninsula Rödön. It must have gone off that way..."

IN July 1931 Storsjöodjuret appeared at Myrviken in front of Anders Bergqvist and Jonas Hansson. The , Mr. Carlsson, was asked by the to make a more detailed investigation of which part of the report read:"Mr. Hansson had observed a large object on the surface of the water. The object consisted of a globelike form, the upper part of which was above the water. The height of this object above the water was about 10 centimetres, possibly a bit more. Behind the globe there was a bow-shaped hump..."

In 1947 in Jämtlands tidning (another local newspaper), Anna Rahm told of her experienced at Åssjön outside Rösta: "The monster was 3 metres long and grey like an elephant with a smooth, hard skin. Its head was as big as a jug and its back was dented in places. In its terrifying and wide mouth its tongue moved up and down in a threatening manner; its eyes rolled, as I've said and its ears were large and stood out. It seemed to have a large, powerful tail. We only saw the upper part of it but its back was wide and it wasn't a serpent as has been said earlier. That I'm sure..."

Then On the 10th of August 1983 Carina Johnson went out in the in a boat . She reports:"Suddenly I saw something that looked like birds about to take off, far out into the lake. They looked like three white gulls moving towards Östersund at an incredible speed...as we came closer it changed direction away from us and then suddenly the water became still and calm. I had a feeling that the thing was relatively large, and what struck me afterwards was that it moved so fast."

In 1994 a young man and his father on a canoe trip witnessed something strange "...Suddenly I saw something like a plough in the water. The water "divided" as when you go water-skiing. It went on for about 10-15 seconds..."

More recently in August 2008 A Swedish documentary film crew claimed to have caught the monster on film. See story and film here: http://naturalplane.blogspot.com/2008/08/swedish-filmakers-capture-storsjodjuret.html

Site with the story of and evidence of the creature:

The stories of the creature have been around a long time . There are not as many sightings as there are of Nessie (about 10,000 according to some investigators) but there are lots of evidence and film to look at. The description sounds once again like a giant eel and would explain the cat like head some people describe. The film as usual is not clear and is no doubt disputed evidence by some. Still it is one more glacial lake from the ice age with a large creature being reported. I wonder when science is going to take notice?