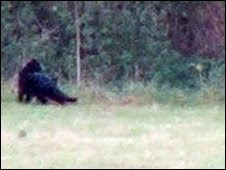 What looks like a 'big cat' has been spotted 30 times in West Dorset since Christmas, according to a man who is trying to discover the truth about the legendary big cat.

Photographer Alan McNamee, from Bridport, is convinced of the existence of the animal.

He has now assembled a team who are ready to respond to sightings as they are reported.

Alan saw the animal close up in 2004 - an experience he said was "scary". He said: "I was working late one night at home and I heard a noise. I went downstairs and looked outside, towards the fields at the back of my house, and I saw that the hedge was thrashing about.

"Then I saw a large cat with a badger in its mouth. "It leapt onto a bank and disappeared.

"It completely shook me up." Alan called the police who visited the scene immediately.

He said: "The police returned the next day to have a look at the area [in daylight] and they confirmed that they had found paw prints." Alan's interest has now been renewed after a series of new sightings, and he has contacted a team of experts, including a 'big cat' expert and a specialist vet, to help establish the truth. Alan said: "I'm hearing of several sightings a week. [The people who see it] are just people going about their normal business. "The last sighting was Friday evening [19 February 2010]. "A woman was driving over the A35 [between Bridport and ], and it was running across a field.

"I have also had land owners who have said they have seen it ."And all of those sightings are of a similar format. "It's farmers finding unusual footprints on their land, or sheep or cattle being attacked. "The animals have two punctures in their neck and their internal intestines are gone. "They have a broken back, there's no blood, and some have been dragged to the top of a tree. "But to drag a heavy sheep across a field for a 100 yards, over a fence and up a tree - that's not the work of a dog or a fox." Alan is now waiting for the next sighting, with the hope that he can get to the scene immediately and find enough evidence or remains that can be recorded and analysed. This needs to be carried out as quickly as possible after an animal attack as this is the key to gathering evidence which can determine what the creature is. "It's vital we get there within a few hours after a kill, to take photos, take DNA and look around for anything else." "Everyone says the same thing [about the creature] - it's black, its tail is as long as its body, it's bigger than a and a good 6ft [1.8m] in length. "There are key things that people see, and what they say is close by, that are key to each sighting." Alan has this advice for people who think they might have seen it: "The first thing to do is to make a note of where you've seen it, and then report it straight away to the police." PC John Snellin, Wildlife Officer for Dorset Police, says all reported sightings are taken seriously. He said: "We get the sightings fairly regularly and most are from level-headed people. "It's a fascinating subject but we wouldn't scare monger - we need to keep it in proportion. "It's not a policing priority but all reports are recorded, but, by my reckoning, there have been nothing like 30 sightings [reported to the police]."But if you do see one, don't approach it - call the police. It is very likely to just run away." PC Snellin believes the animal could be a black puma, and one theory is that it was released into the wild after the 1976 Dangerous Animals Act was made law, which banned keeping dangerous animals as pets - but PC Snellin thinks it is very unlikely an animal would have survived that long, or gone on to breed. Alan McNamee's theory is that it could be an animal that is privately owned, but not officially registered, and is occasionally "let out" to hunt, but PC Snellin believes this is too unlikely as it would be difficult to control. PC Snellin said: "It's not like calling in a black labrador." Whatever the truth, Alan McNamee is hoping to get to the bottom of it. He said: "Most sightings have been in a triangular area between , and Winterbourne Abbas. "But there is something out there causing the damage [to the animals] and it's not a dog or a fox. "It's a predator."

That is one big kitty! I never would want to run into that in a forest...yikes!

It's beautiful though isn't it? There have been lots of sightings of a different sort of big cat in the area I live but sadly I have never seen one. Thank you for your comments btw.It is always good to see them.

Leave Kitty some milk out Meeeow.
No seriously get some professionals
out there and dart it with a drug,
before it takes a young child.