When I wrote the Florida river monster blog I mentioned this attack and I thought it may be an urban myth. Always ready to be proved wrong I investigated further and in Tim Dinsdale's book "The Leviathans" (1976 ed Futura London Paperback),I found the following which I have scanned in. You should be able to click on it and make it bigger to read comfortably.
It is a letter Tim Dinsdale received from the surviving diver which tells the story of what happened. What they encountered could have been a large seal of some kind possibly a leopard seal .Leopard seals are aggressive and one pulled a young researcher under the ice a few years ago and she perished. What it would have been doing in that area I have no idea. Some will say the survivor was hallucinating or traumatised because of the loss of his friends and so made the story up, not consciously but as an explanation to ease his pain. I don't know , all I can say is read it for your self and come to your own conclusions. If it is true it is a frightening episode. 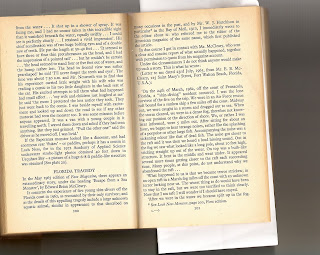 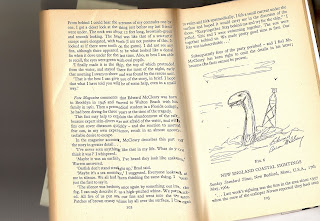 Regarding "Some will say the survivor was hallucinating or traumatised." If I understand correctly, this was actually an explanation offered at the time, by some. But there are problems with that idea. For years, I have been interviewing eyewitnesses of apparent living pterosaurs. Some of these persons have been very scared of what they saw. The descriptions they offered, however, do not vary with the degree of fear that eyewitnesses had experienced during the sightings. (Long tails are commonly described.) In fact, a terrifying event can cement images into a person's mind, guaranteeing that the event will be remembered as it was originally experienced.

I have this book and this story has always stayed with me. However last week I happened across a childrens comic Annual for 1972 (Wham annual 1972). Have a look for it on google. I cant help but think that the author the letter was influenced by this?