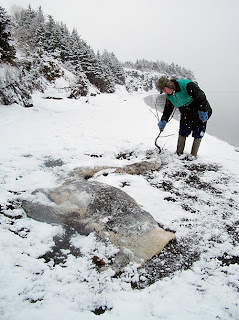 Neither local residents Warrick Lovell, Rich Park, Basil Park, or anyone else it seems, knows what the big creature found dead on a beach here this week might be. The Department of Fisheries and Oceans in intends to check out the Lower Cove site today hoping to find some answers for the question of many curious onlookers who went there to see for themselves what Lovell found during a Wednesday afternoon walk on the beach. “It would be nice to see if anyone knows what it is,” says Lovell. “First I thought it was a seal washed up (on the high tide earlier in the day), but when I went down to check on my boat that evening, I walked over to see and then I knew it wasn’t a seal. “But, I don’t know what it is.” Of unknown origin and species, so far, the odd-looking seaside carcass sits high and dry on the low tide, its approximately 15-foot length includes a pointed, 10-foot tail twisted in the sand, conjuring up Loch Ness monsters for some. The animal, bearing a single flipper-like appendage on its right side, appears to have been decapitated and shows other signs of damage. “I didn’t know what to think of it,” says Rich Park, also among the first to see it close up. The long tapered tail on the squared torso of the carcass caused him to initially think the large hunk of flesh might be a tentacle off a giant said, but on closer inspection it became clearer what the protrusion was not that. It got hair on it in spots. I couldn’t (determine) what it was.” “I’ve lived here all my life and never seen anything like it,” says Basil Park, who went Thursday went to take a look with friends and brothers Gilbert and Ernie Park, and neither one of them could say they knew what it was. “There’s fishermen around here who fished all their lives and they couldn’t tell you.” John Lubar with DFO says the office receives a number of calls from residents around the region each year reporting seals in brooks or to have rotting carcasses of whales or other dead things removed from a shoreline, but claims reports of unknown creatures from the deeps washing up are rare. Common knowledge of the McIvers find spread by word of mouth over the past few days and at least one visitor to the site photographed the carcass and has posted it on Facebook. DFO expects to have personnel in McIvers to do an inspection of Lower Cove by noon today.

Anyone got any thoughts on what this might be? The usual answer is a basking shark carcass or a decomposed whale but maybe they will print a follow up so we find out.

I recently came across your blog and have been reading along. I think I will leave my first comment. I don’t know what to say except that I have enjoyed reading. Nice blog. I will keep visiting this blog very often.