The Beast of Bynoe Harbour.

There is very little information about the Beast of Bynoe Harbor near in . It has been described as being like a plesiosaur . Sightings of the creature have supposedly taken place through out the area’s history. There are cave paintings said to depict the creature. A picture of a creature , nicknamed the Bynoe Harbour Monster, appeared in a newspaper after occasional sightings by fishermen. The newspaper is I presume the North Territory News but a search has not turned up the article. There were apparently reports claiming that a Mr. Burge Brown saw three plesiosaurs swimming off , but again I have been unable to trace the newspaper report. 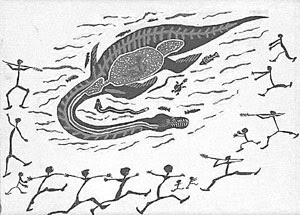 enous peoples looked like a plesiosaur. I have posted it here. The creature looks to have been disembowelled. Whether that is it’s intestines next to it or another creature I am not sure. Perhaps someone with more knowledge of the area and culture may know.

Without much evidence to go on I think we could mark this up to misidentification, though the cave painting is intriguing. There are sharks, crocodiles and various other large marine creatures in the waters around that could account for misidentifications.

Many times people are seeing something typical to their region, but because of many stories of mysterious creatures circulate around for years, decades or even centuries, witnesses tend to mistake them for something else.