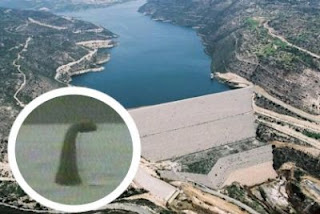 Most people will remember seeing this in 2008.

Rumours are again rife that some kind of reptile or large sea creature is lurking below the water in the Kouris Dam. By Alethea Reynolds 28.OCT.08

Talk of the dam being occupied by a “strange creature” started to circulate three years ago, when a report was made that a crocodile had been dumped in the deep waters. Since then, there have been countless sightings of the “creature from the depths”, with some local newspapers calling the mystery the “Cyprus Loch Ness". One citizen was so adamant he had spotted the creature that he told a newspaper “I watched this serpent with my own two eyes, this was no mistake.” Despite the speculation, no proof has yet been found and even the Ministry of Fisheries and Marine Affairs have drawn a blank on the Kouris mystery. An official from the ministry confirmed that they were actively searching for the creature, adding fuel to the rumours that the lake was home to some kind of serpent. Reports suggest that officials will try and coax the beast from the murky depths by using bait such as live hens and raw meat. In recent days rain has hampered the search effort, which is expected to resume tomorrow. A local community leader, Savvas Sava, told a daily newspaper yesterday that if the creature is caught then it will become a tourist attraction and facilities to house it must be constructed. Source:http://www.famagusta-gazette.com/default.asp?sourceid=&smenu=69&twindow=Default&mad=No&sdetail=6085&wpage=&skeyword=&sidate=&ccat=&ccatm=&restate=&restatus=&reoption=&retype=&repmin=&repmax=&rebed=&rebath=&subname=&pform=&sc=2350&hn=famagusta-gazette&he=.

The Kouris Dam was put into operation in 1988 to provide water to the area. The dam has fish stocks of roach, pike-perch, carp and mosquito fish. The water has a high pH level and is hard and the water temperature of the reservoirs is between 8°C and 27°C.Since 2005, a number of witnesses have come forward reporting to the authorities that they have observed an animal moving like a snake in the waters of the dam. There was a report that someone had released a crocodile into the dam in 2005 as it became too big for them to care for.

Fears imported croc is on the loose in

Wildlife experts in are trying to verify reports a crocodile smuggled to the island is on the loose in a nature reserve popular with visitors. In recent years reports of crocodile sightings have been common on the island, where they do not breed and the closest thing that remotely resembles it is the innocuous and much smaller chameleon. "The fisheries department has been conducting inquiries since mid September to verify information on the presence of a crocodile at Kouris reservoir," 's department of fisheries said, adding the information could not be verified. Rumours have been swirling for some years of crocodiles in the vicinity of Kouris, a reservoir just north of the southern coastal town of . Authorities searched the area in 2005 after reports baby crocodiles smuggled from were released when they became too big for the owner to handle. Nothing was found. New inquiries and a sweep of the area eight times in the past month have not found any trace of it, the fisheries department said. Kouris is 's largest reservoir, though reserves are now virtually depleted by a four-year drought. It is a popular haunt for anglers, where the normal catch in a good year would be carp or a largemouth bass. They have now been told to be on the lookout for the oversized reptile, which feed on fish, reptiles and mammals. Depending on species, crocodiles can grow anything between 1.5 metres and 5 metres in length. The latest report suggested the reptile was a metre long. Home to pygmy hippos until about 11,000 years ago, 's wildlife is now relatively limited, with nothing bigger than the timid moufflon goat in its mountains.

There appears to have been no more news on the creature in the dam. Whether it was a crocodile or an unknown creature, remains unsolved. If it was a croc it could be quite a size by now. Lets hope anglers take care when fishing, just incase.