There have been sightings of a strange creature in for many years.

FURNISHES A SEA SERPENT AND A MONSTER.From the San Francisco Chronicle, March 28.:

The existence of the giant sea serpent is no longer in doubt. It has been seen in the waters of . According to the statement of J.P. Allen, of the Bank of California, he and several other residents of were standing on the deck of the City yesterday morning, at about 8:00 o’clock, about midway between Alameda and Goat Island, when a huge black monster suddenly raised its head and neck from the water to a height of about 10 feet, opened its jaws, displaying a mouth two feet wide filled with rows of sharply pointed teeth, and after taking a curious glance at the passing steamer plunged again into the water, at the same time elevating a sixty-foot tail, with which it thrashed the water for some time, after which it made off in the direction of the Alameda baths, near which some fishing boats were anchored. Some incredulous persons to whom the story was told say that the ferryboat struck a floating spar, forcing one end downward in the water and elevating the other as the steamer passed over the submerged end, and that after the steamer had passed the elevated end fell back into the water with a splash. We may expect soon to hear of the destruction of the fishing fleet, or more probably the establishment of a hotel for Summer boarders in the vicinity of the wharf.

(The article goes on further , you will find at the site at the end of the blog post.)

In November 1983, a construction crew working on Route 1 just north of the saw a creature, underwater, approaching the land. They estimated the it to be 100 feet long ( 33 metres) and about 5 feet(1.6 metres) around the body. They described it as black in colour. With binoculars they observed it throwing it's head about and whipping it's body around in what appeared to be coils.

Then in 1985 two brothers Robert and William Clark were sitting in a car near the sea wall. This is their story of their experiences and there is a link to their site at the end of the blog post where you can see stills of the film they took etc :

We have had 8 sightings of a sea serpent in during the period 1985-87. The first and closest sighting was only 20 yards away. We were parked in our car at 7:45 a.m. looking north at just east of the and west of . The water was dead calm and we saw some sea lions playing about 150 yards from us. We saw what we thought was another sea lion swimming towards them from the west. When it was a few yards away the head and neck raised out of the water at least 10 feet straight up. It then lunged forward and attacked the sea lions. The sea lions fled towards where we were 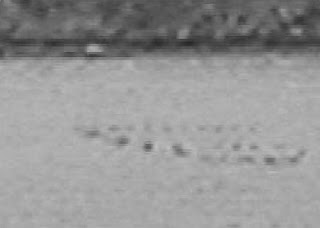 parked with the creature following right behind them. We could see the creature create several vertical undulations in its neck as it swam through the water. Then it went underwater. The sea lions swam right in front of us leaping in and out of the water in an attempt to escape the creature. We didn't know it until the next day when we examined the area at low tide but the sea lions swam over a ledge with rocks on it that protruded 20 yards into the bay. The water went from 40 feet deep to only 3 feet deep above the ledge. Suddenly, 20 yards in front of us we saw what looked like half a truck tire break the surface with a long neck and head just under the surface of the water in front of it. A second arch broke the surface of the water behind the first and then we watched what we thought was a huge black snake swim by but when we expected it to end it got wider. Then there was a splash and a crashing sound as it stopped dead in the water. Immediately, we saw it lift its neck quickly out of the water and it pulled itself backwards to get off the rocks. It splashed back into the water and disappeared. instantaneously, the rest of the neck came out of the water in a corkscrewing manner as it tried to pull itself off the rocks and into the deeper water. As it corkscrewed it exposed the midsection and the underbelly above the water and we got an excellent view. the midsection had hexagonal scales that did not overlap but were connected to each with a common side. They varied in size from the size of a dime to the size of a silver dollar.. We had 7 more sightings in the next 2 years and were able to get 6 photos.

In view of the scepticism they received , they issued the following challenge:

We (Bill and Bob Clark) have had several sightings of sea serpents in since 1985. On February 5, 1985 we saw a sea serpent beach itself only 20 yards from where we were parked in our car and we saw the entire animal expect the tail. On January 26, 2004 we took a 3 1/2 minute video which we claim contains images of several sea serpents swimming in SF Bay. We had 2 independent analyses of the video done. One was done by BSM Associates (expert image analyst Clifford Paiva and physicist Dr. Harold Slusher) and the second was done by marine biologist Bruce Champagne. Both analyses concluded that our video contains images of several large unknown serpentine marine animals swimming in SF Bay. We invite all skeptics to provide us with the expert of their choice who is willing to do an in-depth analysis of our video and we will send them a free copy. We only request that they agree not to post any portion of the video on the internet or anywhere else without our permission and if the conclusion of their analysis disagrees with the Paiva/Slusher analysis and the analysis that they provide us with their supporting documentation. We can be reached at our email address sfseaserpent9@hotmail.com.

For more details go to this site, includes info about new sightings:

They had their film analysed and an academic paper was produced by Bruce Champagne which can be found on the web. (I did have a copy but sent it to CFZ for their archives).I suggest you go and browse their site and have a look for yourselves, before deciding what you think. There is a history of sightings in the area so this is not the first. It is certainly an interesting one . As I always say keep an open mind but not so open things fall out, in other words try and view everything as a sceptic but be prepared to believe if the evidence is incontestable. If anyone has any thoughts after viewing the site , please post comments here , I would love to hear them.

I have to thank my lucky stars that we didn't see this when our cruise ship sailed into the San Francisco Bay. We did see dolphins swimming along side the ship as we went under the Golden Gate Bridge.

Thanks for sharing this with us! Some really amazing ideas.
It’s really helpful people needing information on this topic. All the best guys Thank you for your post. This is excellent information.
I have some relevant information you can review below.
San Francisco custom tour