Lake Worth Monster a Fake? 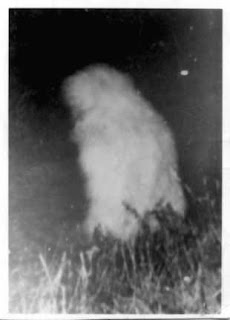 Couples say they saw a monster 40 years ago

She has the most famous, perhaps the only, photograph ever taken. It was given to her by Allen Plaster, who snapped it in October 1969 at 1:15 a.m. near . Both her descriptions and the photo show a large white something, though it doesn’t seem to favor a goat at all. Plaster, interviewed in 2006, said he doesn’t buy the monster story now." Looking back, I realize that when we drove by, it stood up," he was quoted as saying in the Star-Telegram. "Whatever it was, it wanted to be seen. That was a prank. That was somebody out there waiting for people to drive by. I don’t think an animal would have acted that way." For his part, though, Plaster isn’t talking anymore. He declined an interview request.

In 2005, a reporter at the Star-Telegram received a handwritten letter, with no name and no forwarding address. "One weekend, myself and two friends from North Side High School decided to go out to Lake Worth and scare people on the roads where there were always stories of monsters and creatures who would attack parkers," the letter began. The writer claimed to have used tinfoil to make a homemade mask to scare a truckload of girls. When the friends were finished, they went to a Dairy Queen on the north side."I had a Coke float. The goatman had a parfait," the letter said. "The goatman turns 55 this summer and resides a peaceful life in the hills outside of Joshua." Except that whoever wrote the letter — a man who lives somewhere near , based on the postal cancellation — isn’t the only person to make such a claim. Marrs, the reporter, told the newspaper in 1989 that police questioned several Castleberry students who were found with a faceless gorilla outfit and a mask.Fort Worth, Texas magazine outed a man this month — identified only as "Vinzens" — who admitted being involved in the infamous tire-throwing incident of July 11. He said the tire went airborne only because it hit a bump after they rolled it. But he had no interest in naming more names or publicly taking credit or blame. The owner of a kennel near has also said that he lost a macaque monkey that summer and that perhaps the primate was responsible. All of it could be true. Or none of it.

Clarke’s husband maintains that the monster was definitely not pranksters." She offered a $5,000 reward for any person who could pass a polygraph that they were the monster," Lederer said. "She never got a call." The is holding its own monster revival celebration Oct. 3, a date selected for the temperate autumn rather than any connection to the events of 1969. It will have canoe rides, guided hikes around , live music, food and drinks. For those who belong to the Friends of the Nature Center, Texas Bigfoot Research Conservancy Chairman Craig Woolheater will speak at a private dinner that night.Tuttle said the Nature Center’s staff is skeptical of the existence of a monster.