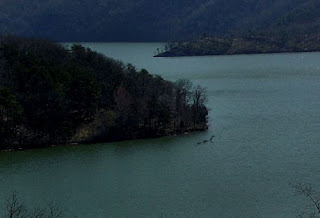 A story hit the news in 2006 about photos of raystown ray , a lake monster.

The Raystown lake spans about 30 miles and contains 8,300 acres of water and is reported to be over 185 feet deep in places. The lake is mostly man made from a dam being constructed about the original lake. In 1907 the construction phase of the project got underway, using the most modern mechanical equipment available, along with a large force of Italian immigrant labourers who lived at the site. Work on the project continued until 1912, when lights powered by the Raystown Water Power Company's generating plant went on in and Huntingdon

Raystown Ray
For decades there have been many sightings of a creature in Huntingdon County's Raystown Lake. Old photos show large shadowy figures just below the surface, boaters describing sudden water turbulence and strange appearances of a large water creature, Raystown Ray."We've known it's been in there a while now," admitted Managing Director of Raystown Lake Dwight Beall when he was asked his thoughts on this astonishing discovery. "It's a private creature, but it comes out around this time of year. Call it Raystown's own Punxatawny Phil." Call it what you will, but this is no ground hog swimming in the water. It seems that our favorite lake may now have a mascot.
When asked his professional opinion, Jeff Krause, Wildlife Biologist at submitted the following statement in writing: "I believe it must be a vegetarian. We have not seen any evidence of this animal taking fish, geese, otters, or ducks. So I would suggest that our swimmers and boaters are very safe. It appears this animal's habits are similar to Manatees, which are completely herbivorous and gentle. The increase of weed beds around the lake is probably providing more food in the shallows for herbivores and that would increase sightings." Krause concluded with, "Even if a visitor does not get a chance to see 'Ray' while at the lake, there is an excellent chance to see nesting Bald Eagles and recently re-introduced Osprey and River Otters, which were not present just a few years ago."
It is a wonder how "Ray" has managed to stay submersed with nearly 2 million visitors frequenting the lake each year to fulfill their boating and other recreational activity needs. According to staff, the lake spans about 30 miles and contains 8,300 acres of water. With depths of the lake being over 185 feet deep, the lake remains over 100 feet deep at Seven Points, which is 10 miles upstream from the dam. With numerous coves, submerged timber, and other structures there is plenty of room for "Ray" to hide.

I thought it was a hoax at the time but then came across these sightings:

Dillon Says:July 22nd, 2008 at 6:56 am While we where boating off at an island right where the other siteings where taken place we saw ahuge dark ark that was up about five feet out of water. My freind claimed to have seen scals coming off the creater. we saw this same figuer twice aaround the same spot just in one day.after that we were to afraid to go toobing again.we were thier with a calvery chapel church.

July of 1994. John R. Pendel Pittsburgh, PA
Where: 20 minute cruise from the camp grounds area at . (only been to the lake once -not sure if there's more than 1
campground) Sighting It was approximately 9AM in the morning
and a friend of mine invited me and my wife as well as his in-laws
for a quick morning ride on the calm lake. It was a nice warm
morning cruising around 20 knots. Me and my wife were on the
stern of the boat, his wife and her parents were on the bow.
While my friend was navigating the boat, he turned around and
were having an idle chat drinking coffee and about 20-25 minutes
into our ride the three of us glanced off the port side of the boat
and all at the same time seen ripples in the water, a long dark
somewhat shiny black object that surfaced to the top of the water,
then it seemed to spin and turn over and then submersed and
disappeared. He immediately shut down the boat in amazement,
the 3 of us asked each other, "did you see that?" His wife and her
parents were asking what was a matter and we were speechless.
The size of the object was at least 10 to 12 feet long putting into
perspective we were riding on a 19 foot open bow boat.
The object was approximately 40 to 50 feet away. Never-the-less we
finished our cruise and reported our findings to the rest of the
group we were camping with and obviously no one believed us. To
this day we still talk about what we saw and we still get harassed
about the "fish story". A friend of mine sent me this link today thus
the reason for just reporting it now. Now we have proof to our
doubting Thomas friends that others have seen what we seen that
day. John R. Pendel Pittsburgh, PA

May 14, 2006 (John) While night fishing on the lake May 14, 2006 at around 2:00 am,
I noticed something large and dark slowly appear in the water
approximately 40 yards away. It was very slowly moving through
the water. I asked my friend if he could determine what it was.
The visible portion was approximately 8 - 12 feet in length. After
shining a Surefire flashlight at it, it submerged. There were no
noticable features such as a head or humps.
June 20, 2006 (Walter G.) I Was enjoying a morning of fishing on
20 June 2006 right straight across from 7 points marina. The sun
was starting to make the morning come to life and the fish were
starting to jump. It was about 6am and I seen what I thought was a
fish, maybe a musky, come out of the water and grab a stick. The
stick was about 3 or 4 feet long, and the "fish" was out of the water
as far as the stick was long, not showing the tail end. When I came
home I told my wife what I had seen and said that it looked like a
large leg coming out of the water and garbing the stick. I joked and
said that I would have liked to seen the rest of it. Today is 8 July
2006 and my son told my about Ray and I look up the web site,
which I never heard of till today. Now I think that maybe I didn't
need to see the rest, but could it have been?

Sighting June 16,2006 (Lee, Lea & Family) On the last day of our vacation at
Raystown Lake, June 16th , we woke up early in the morning to see
what we believe is Raystown Ray. The figure was moving about 100
yards behind our boat while we were tied off at Panther Cove. It
slowly made it's way across the cove behind Marty's and
disappeared into a small inlet. What a great way to end a great vacation!

I heard about this Raystown Ray a few years ago and thought it
was just a hoax to get more people to the lake. But after Sunday
August 3rd Im not so sure that he doesn't exist. It was 7:15 PM
and we just loaded the jet skis and started to dry them off. My
girlfriend jokingly said "Look, Its Raystown Ray"! I looked to see
what she was talking about and saw a neck and a head
sticking about 3 to 4 feet out of the water and it was striding toward
a boat that was coming into the no wake zone at the 7 Points.
We watched it for about 3 minutes. We saw a wake in the water
from its neck and about 15 to 20 feet behind that wake was
another wake, but we couldnt see what was causing that wake.
It disappeared the closer it got to the boat. My mom, dad,
girlfriend and I all saw this thing. If it wasnt Raystown Ray,
I would like to know what it was!

So hoax, autosuggestion or did they see something? One of the sightings was before the 2006 press release so they could have seen a large eel or fish in the water. Large fish are often reported in man made lakes and it is a fishing area. Sturgeon anyone?

My family has been boating Raystown when it was still a shallow river (9 ft at the deepest). The lake bottom is filled with trees that uproot and float to the surface periodically, causing the disturbances that people see. The idea of Raystown Ray was created by the local park service to bring in tourists years ago...all the locals joke about it.

I have lived around raystown all my life. I used to go to the old dam which was quite a bit smaller. My grandfather used to swim in the river before there was a dam. I can without a doubt say there is no raystown ray or anything else in the area such as bigfoot or the boogyman. This was a ploy by the visitors bureau to increase more tourism. In short a money making sceam.