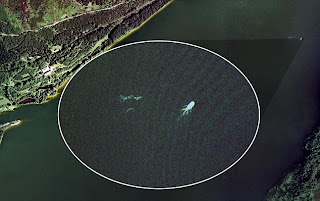 Picked out by a Google Earth satellite, is this the Loch Ness monster... or just a boat?

It promised the world views of the entire planet from their laptop. But could Google Earth have unravelled our favourite mystery of the deep?One internet fan claims he found the legendary Loch Ness monster in satellite images on the virtual globe.Security guard Jason Cooke said the 65ft oblong shape followed by thin strands is actually the highly contested creature supposed to inhabit Loch Ness in the Scottish Highlands.

Well it looks a boat to me unless Nessie is a squid. Go and take a look for yourselves.