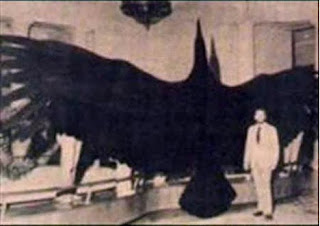 Under my blog on thunderbirds here was an exciting comment this morning.

I saw a bird like this just lastnight August 11th 2009 at approximately 11:30 p.m. while watching the sky for meteors. It was easily as huge as a human..I am still in shock, my children even saw it! I live in and I know everyone will think I am a nut case, but this is 100% true!

I received this email from a man who lives west of , near . He states he witnessed a large flying creature last evening (August 11, 2009). He has requested that his full name be withheld at the present time. (Note: edited for typos only)

Dear Sir. I witnessed a large flying creature this evening that I cannot identify. I found your site during a search. I'm apprehensive of mentioning it to any friends or family until I can get a grip on what this was.

I live west of , near . Today, I was on a random outing to the area near the dam. At about 7:30 pm, I was on my way back up the trail when I suddenly heard a loud awful scream coming from below the dam downstream. It sounded like an owl but lasted longer and was much louder. I stopped walking and watched downstream to see if I could catch a look at what caused the sound.

I then noticed a large flock of birds flush out of the trees near the riverbank. Then suddenly this giant flying creature swooped down into the river valley and just as quickly flew back up into the rocks. I continued to watch but did not hear or see it again. I call it a creature because it looked nothing like a bird. I was about 50 yards from it and would say conservatively that it's wing span was 15 ft. or so! It was dark colored and had a very long beak and a strange long thin tail. This sounds crazy, but it actually resembled one of those flying dinosaurs though the head was not as large and it looked like it had feathers.

I got back home and looked on the internet for examples of bird species but found nothing close. I'm not originally from this area and have never heard of anything like this. That is why I'm contacting you. Do you have an idea what it was? I see you have a website, maybe someone who reads your site could help identify it.

Maybe the meteor shower brought out some strange creatures or maybe that it was just that people were out and about to see them. Certainly interesting!

I also see a thunderbird during a strange storm actuall. I have a photo but have no idea how to get it to someone!

Thank you for letting me know. I suggest you send it to cfz or the anomalist.
www.cfz.org.uk or www.anomalist.com. I am sure they would all be very interested in your photo. You should be able to email it to them as an attachment.

i have been doing alot of research lately on the thunderbird and the sightings seem to be going south accross the united states. please email me with any information you have that could be related to this theory. mike-c_3@hotmail.com

Hi Mike
I suggest you get in touch with Loren coleman through his site www.cryptomundo.com. I am sure he will be able to help.

We were in Pacifica MO, tonight around 11:30 and we noticed a massive flying creature, not once but three times. My son even noticed it on his own the third time. We were near a large cliff / mountain with some type of cave openings. We don't live in the area, I can say for sure we turned onto a road called viaduct road, went past a fire station and continued on for about 1 mile before we first noticed it. It was brownish / grey and the body portion was at least the size of a large adult human. This creature was tracking us - in a circle pattern. We were driving an escalade with the blue color headlights, this may have cause interest in us. The third time around us we viewed it in front of the vehicle, around driver side and around towards the rear of the vehicle, the factory tinted windows did help it vanish into the sky from out point of view. Please understand when we could see it the range must have been about 150 feet in the air, not more than 250 feet. The distance was never less than 100 yards, often much greater. We were going about 35- 45 MPH. I have never thought of anything like this in my life! It is 3:33 and my son and myself are wide awake in a hotel 17 miles away from the place we first noticed the creature. UPDATE - checked google maps, the first time we noticed this was just off the I-44 Loop near the roads of Lost Hill LN and Clear Creek Road. We have been searching this out for hours. If you have any info please email me at prevost@mchsi.com , thanks!

I saw one about 2 years ago. I live in New Jersey and i heard about this thing on monster quest. It was in June and it was a nice sunny evening. I went outside to water the flowers. When i went outside the birds were chirping as usual. About 15 minutes after i went outside i noticed that it became silent...it was erie. Suddenly i noticed a large black thing sitting next too my neighbors bush. All of a sudden it turned and looked at me. For about a few minutes it just stared at me with its dark eyes. It had a white ring around its neck and a long beak. it was jet black and next it flew off...the sound from its wings was so loud. my mother asked me what it was...i was petrified. It flower over my neighbors deck which is 15 feet wide. scariest thing i have ever seen in my life. I still have nightmares about it.

Thank you for sharing your experience. someone else may come forward who also saw something.

I saw a very large bird perched atop a fir tree. in the louisiana swamp land between Alexandria and New orleans. On August 18th 2002. I've been waiting for a site like this to tell my story. I remember telling my wife to look at how freakishly large that bird was. and how I had never seen anything like it. It had a long black beak and was very tall perched. It must have stood at least five feet tall. It was black in color.

I know of someone who has a VHS of a thunderbird taken at a New Jersey dragstrip several years ago. It emerged from a large thunderhead at about 40,000 feet,made abanking turn ,and returned to the cloud. Even though it was several miles away,you could tell it was of enormous size.As large as a jetliner,and that's no exaggeration.It flew with a graceful and powerful motion which seemed consistent with its size.I'm currently trying to obtain a copy of the video- Greg from Glastonbury,CT

Greg, I have a jersey devil site I'd like to use the video on. Leave an update if you get ahold of the VHS tape please.

My little brother saw this bird when he was nine on our backyard her in merced California! My parents noticed how scared he was after running inside the house screaming that a big bird wanted to take him or something. I thought he was nuts until today... he was watching TV n an episode of the Thunderbird sightings came on n he literally yelled for all of us to watched it. I was so shocked!! It was true!! He was being honest!! This is crazy n I want to see video footage if u guys know where I can sew a video please email me kiki2092001@yahoo.com

I am so glad there are others who have seen what I have seen! In Pueblo Colo. in Feb. of 2008 I saw a thunderbird in fight while in a meeting at a library, I was listening to a lecture, and looked out the window and stared in shock, and then what turned into frozen fear.I was unable to say anything to any one until I told my husband that evening, who did not believe me. I also called the police who were not at all interested, I also tried to contact someone on Cryptozoology, who did not respond back. Anyhow, it was black, extremely large. The day was cloudy and cold, it just seemed to sore around a while and then went away. I estimate from other birds that were flying around that day to be the size of a small plane.

Hi,
Im from Canberra ACT, Australia and I have footage of what could be the Thunderbird!

At my job site, in PA, I saw a big bird, what people call a Thunderbird. It was dark gray in color. It looked like a pterodactyl, but with feathers, and it had the finger feathers of the eagle. This bird's wing span was huge! It was bigger than any bird I ever saw! When it flew, it had a dark gray, more straighter tail, not a fan tail like an eagle when it flies. I saw the big bird standing next to a railroad car and it was as tall as the railroad car wheel. Plus the stone ground that it was standing on was a little lower than the railroad track. The big bird had short yellow legs, not long legs like a Blue Heron or Stork. The big bird had normal size claws, for the length of its legs. It had a dark charcoal gray, straight, thick beak like a pterodactyl, not curved like an eagle. I don't think it had any teeth, I didn't see any. It had a triangular tuft, of feathers, or skin, or hairy down, that came to a point on top of its head, that made it look like a pterodactyl. I later measured the area that the big bird was standing on. The big bird stood about 38 to 40 inches tall including the tuft on top of its head. It was in a hilly, swampy, cornfield area, around the border of the area I saw it in, during the summertime, about 3 P.M. June 2007. When it flew away, over the maple, pine, fir, and balsam tree line, to the North, that's when I saw its huge wingspan. It didn't land in any of the nearby trees. Somehow I don't think the trees would have held it very well, it was so big!