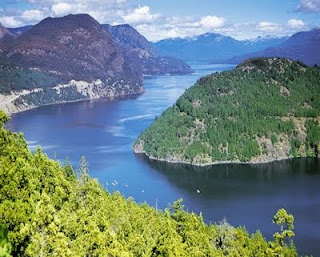 Lago (lake) Lacar, is a glacial lake in the , and is supposedly the home of an unknown creature. The locals call it El Cuero, meaning “ Cow Hide” .It is described as being hairless with a body structure which has the appearance of cow hide splayed out. Cuero’s head is said to be ugly , with red stalks upon which are it’s snail like eyes. Some say that the creature has a proboscis like mouth located in the centre of its torso through which it sucks the blood out of both its human and animal victims. Eyewitnesses have also reported seeing a serious of razor sharp claws along the fringes of El Cuero, which the creature uses to secure its prey. The creature is also known by the names “El Threquelhuecuvu,” or “El Bien Peinado” (“the smooth-headed one”).

There are no documented sightings of El Cuero but there is a local story which is repeated to everyone. A local mother was washing the family’s clothes on the banks of the , when to her horror as a huge stingray like creature lunged out of the water and grabbed her infant child which lay sleeping next to her on the shore. Additional evidence of this creature’s carnivorous tendencies are said to be the bird and animal remains, which litter the lake’s shoreline after one of its nocturnal feasts. The features described about the creature’s appearance have lead to speculation that it may be a type of freshwater stingray , which are known in .

This creature , or something like it, has also been reported in the rivers and lagoons of both and . Some have pointed out the similarities between this creature and the Hueke-Hueke.

is also said to be the centre of other strangeness. In 1850 a mermaid like creature, apparently half amphibian, and half human was seen in the lake. The mermaid was reported to be able to levitate over the water, and supposedly lived in an underwater city. Source: Fabio Picasso, Strange Magazine #10

And then in 1982 UFO sightings were reported also at the lake.

So is this the Cannock Chase of ? It certainly seems to attract some interest and produce some strange stories.

A blog about all unknown creatures of the area:http://patagoniamonsters.blogspot.com