“Sir,—The ‘Anglo-Brazilian Times,’ March 24th, 1883, says that the Brazilian Minister at La Paz, Bolivia, has remitted to the Minister of Foreign Affairs in Rio photographs of drawings of an extraordinary Saurian killed on the Beni after receiving thirty-six balls. By order of the President of the dried body, which had been preserved at , was sent to . It is 12 metres long(39 feet) from snout to point of the tail, which latter is flattened. Besides the anterior head, it has, 4 metres(13 feet) behind, two small but completely formed heads rising from the back. All three have much resemblance to the head of a dog. The legs are short, and end in formidable claws. The legs, belly, and lower part of the throat appear defended by a kind of scale armour, and all the back is protected by a still thicker and double cuirass, starting from behind the ears of the anterior head, and continuing to the tail. The neck is long, and the belly large and almost dragging on the ground. Professor Gilveti, who examined the beast, thinks it is not a monster, but a member of a rare or almost lost species, as the Indians in some parts of use small earthen vases of identical shape, and probably copied from Nature.”

The corpse of the so called Madidi Monster was allegedly moved to at the President’s request and subsequently disappeared.

Now this was regarded as a hoax especially in view of the “photographs of drawings” (made me think of the Goon Show “here is a photograph of a cheque” lol) . If they had photographs why weren’t they of the original corpse not of the drawings? Then I came across this fossil find: 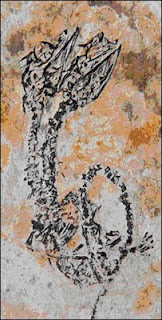 have found what is thought to be the first example of a two-headed reptile in the fossil record. The abnormal animal, belonging to a group of aquatic reptiles, was unearthed in north-eastern and dates to the time of the dinosaurs. The specimen reveals that it must have been very young when it died and became fossilised, says lead researcher Eric Buffetaut. "Living animals like this are known. But if you compare the number of reptiles born with two heads with the total number of reptiles born, it is very small. "So the chances of finding a fossil like this are extremely low." The abnormality is known to occur with some frequency in modern reptiles; about 400 cases of two-headed snakes have been recorded in historic times.

IT could be that the monster was a deformed crocodile or reptile of some sort that had survived for a few years until adulthood. It certainly makes more sense than a hydra dinosaur. As it is a rare event for an animal to be born like this , it is unlikely that local people had seen anything like it before .

The story of the Madidi Monster is here: