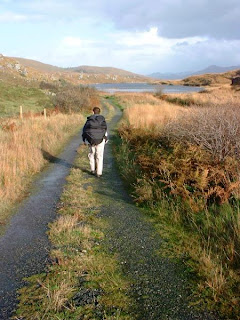 Lough Fadda In Ireland is known for it’s salmon and trout fishing, and also reports of an unknown creature seen in the lake. For generations the locals of the area spoke of strange creatures called Horse Eels that inhabited the surrounding bog waters and children were warned to stay away from the loughs as Horse Eels dwelt there. In the 20th Century a lot of people dismissed it as folklore. Then there was a sighting in 1954. Four members of the local Clifden community saw the creature and two were reported to be very disturbed by the experience, so much so that when they returned to Clifden they insisted men armed with rifles be sent to the scene.

In June 1954 Georgina Carberry and three friends cycled down to Lough Fadda. They took a boat owned by the Clifden Angling Association and set out to fish. Later in the afternoon they decided to set the boat ashore along a finger of land that almost splits the lake in half to have some refreshments. They were sitting down with their tea when one of the group pointed out an object moving from "an island" which she assumed was a man swimming. The object was approaching them and as it got closer it was obviously too big to be a human swimming . They began to get concerned and when it reached within twenty yards (18 metres) made the first move and jumped back, the others followed and moved away from the waters edge. The movement must have disturbed the creature and it swung right around a rock near the shore and dived. In two minutes it was up to the island again where they were watching and reappeared. When the creature came close to the group on shore it opened its "huge great mouth". Two big humps were noticed sticking above the water behind its head. said she spotted a forked tail when it swung around the rock. (Another witness "Ann", didn't recall seeing one, when interviewed later). likened the creature’s mouth to a shark's and described the animal's skin as "wormy" or "creepy". (She explained to F.W. Holiday when interviewed that the "body seemed to have movement all over it all the time.)The witness called “Ann” recalled later on being interviewed that it had prominent eyes to the front of the head. “Ann”,( one of the two surviving members of the group) was interviewer in 2001 by a local historian and the details of the sighting she told him matched the details from nearly 50 years previously, it was still so clear in her mind.

The Loch Ness Investigation bureau came to search the lough in 1965. The team included Captain Lionel Leslie, Dr. Roy P. Mackal , and David James, founder of the Loch Ness Investigation Bureau. Captain Leslie set off 5 lbs of explosive along the of in an attempt to lure the creature out.( a similar thing had been tried at Loch Ness in an attempt to imitate the 1933 road blasting to lure out Nessie, the police at however made them stop). It was recorded that about ten seconds after the blast, a long black object broke the surface and began violently thrashing about. Cameras were on hand but apparently failed to capture any footage. The creature thrashed so wildly no identification or conclusions could be made of the brief sighting. Nets were left across the lough but no further evidence was obtained.

So a candidate for the giant Eels theory? I think it sounds very like many other sightings and could well have been an enormous eel. It may have been protecting it’s territory or moved to that lough because it was hungry. Sadly the blast may have killed it or it may have moved on because of it , as there seems to have been no sightings since.

F.W. Holiday's book “The Dragon on the Disc” which is out of print but still available as a second hand book through amazon and other book sellers ,contains details of the incident and interviews with the witnesses. ( When my copy is returned I will scan in some of the interviews if possible for blog readers to see)