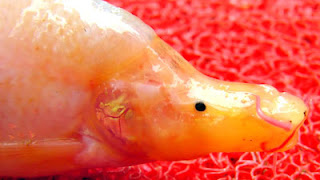 Villagers in have caught some alien-looking fish from a lake in a mountain cave 1,000m below the ground. Experts have been unable to identify the fish caught in the cave, near Daluo village, in southern 's Guangxi province. The waters of the lake are said to promote longevity in the region which has more than its share of centenarians.The fish have a duck bill-shaped flat mouth and red lips, long, slim 'moustaches', and eyes close to their mouth.The head of the village, Li Zuneng, said locals had previously heard the oldest members of the village speaking about the fish. However, as none of the younger generation had ever seen them before, he says, many considered them to be a "fairy tale".They were proven wrong when a number of the fish were caught deep in the cave, known as Fu Yuan Dong, which means ''. Speciments were sent to the and Guangxi provincial aquatics institutes for inspection, but none of the experts there knew what species they were. In the remote and mountainous area, a census in 2000 recorded 74 centenarians out of the total population of 238,000.That works out at more than 30 per 100,000 people - well above the international standard of 25 for "hometowns of longevity", recognised by the International Natural Medicine Society.

It shows that are still new creatures to be found and old ones to be re-discovered.

How bizarre...it resembles a hippo.
~above the norm~