Tim Dinsdale shot a film in April 1960 that many believed was proof that the Loch Ness creature existed. In 1965 it was examined by the Joint Air Reconnaissance Centre (JARIC) and for those who have never seen the report I have scanned in the main points, from the HMSO document for you to read.(Click on them to make them bigger) 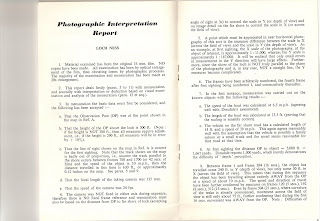 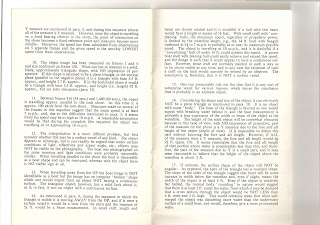 The film is dogged by controversy as  there are those that say it was a boat filmed under bad light conditions. See : http://www.nessie.co.uk/htm/the_evidence/analysis.html
(you will find many other sites with this analysis, this was just the first I googled)
And those that say that is rubbish and it shows an animate object:
The only non-Nessie explanation the disbelievers have been able to put forward is that
Tim filmed a boat which, under the lighting conditions then prevailing, somehow didn't
show up on the film while the wake did. However, various computer enhancements of
the film have failed to reveal anything like the shape of a boat. Tim had given me a 16mm copy of his film, and I recently had it scanned onto DVD. Frame-by-frame viewing of the right-to-left wake confirms that there seem to be fairly regularly spaced splashes, every few seconds, that seem to be TO THE SIDE OF THE WAKE, consistent with Tim's interpretation of them as "paddle strokes". However, the resolution of this commercial scan is not sufficient that I could be completely certain about this.
However, it IS certain that there is no boat making this right-to-left wake. A faculty member in the Computer Science Department at Virginia Tech was good enough to scan a number of frames at higher resolution and to examine them under various types of enhancing techniques to look for shapes and to vary the contrast. There is no boat making that wake. Source;http://henryhbauer.homestead.com/DinsdaleFilm.html
( with kind permission of Henry Bauer)
In 1993 Discovery Communications made a documentary called “Loch Ness Discovered” .They  featured a digital enhancement of the Tim Dinsdale film. They said a computer expert had enhanced the film and noticed a shadow in the negative which was not obvious in the film. The expert enhanced and over layered frames and  then discovered what appeared to be the rear body and  flippers plus two  humps of a plesiosaur type  body in the shadow in the water.
Tim Dinsdale also filmed a boat to compare the wakes with, so there could be no mistake. I suggest you read the two sides of the argument and make your own mind up. I found Tim to be honest but however a little naive , in that he thought that if he believed it was proof , others would too. Sadly we live in a modern sceptical world with computers and lots of technology, if only that technology had been  around when Tim took the film, we might have proof one way or another now. I am glad he is no longer with us to read the controversy around the film as I think he would have been upset.
The Leviathans

Thanks for posting this information. For years I've seen a lot of people claiming to have footage proving it's a man in a boat when the contrast is altered but have yet to see anything conclusive. That's not to say it isn't. Sadly after 25 years of believing in the Loch Ness Monster(s) I'm about to give it up.

Getting old and losing hope sucks!