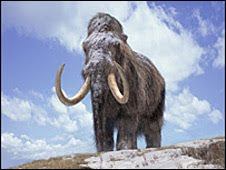 Mammoths had a form of "anti-freeze" blood to keep their bodies supplied with oxygen at freezing temperatures. Nature Genetics reports that scientists "resurrected" a woolly mammoth blood protein to come to their finding. This protein, known as haemoglobin, is found in red blood cells, where it binds to and carries oxygen. The team found that mammoths possessed a genetic adaptation allowing their haemoglobin to release oxygen into the body even at low temperatures. The researchers sequenced haemoglobin genes from the DNA of three Siberian mammoths, tens of thousands of years old, which were preserved in the permafrost. The mammoth DNA sequences were converted into RNA (a molecule similar to DNA which is central to the production of proteins) and inserted into E. coli bacteria. The bacteria faithfully manufactured the mammoth protein. "The resulting haemoglobin molecules are no different than 'going back in time' and taking a blood sample from a real mammoth," said co-author Kevin Campbell, from the of in . Scientists then tested the "revived" mammoth proteins and found three distinctive changes in the haemoglobin sequence allowed mammoth blood to deliver oxygen to cells even at very low temperatures. This is something the haemoglobin in living elephants cannot do. "It has been remarkable to bring a complex protein from an extinct species back to life and discover important changes not found in any living species," said co-author Alan Cooper, director of the Australian Centre for Ancient DNA at the University of Adelaide. Without their genetic adaptation, mammoths would have lost more energy in winter, forcing them to replace that energy by eating more. The ancestors of woolly mammoths and modern-day elephants originated in equatorial . But between 1.2 and 2.0 million years ago, members of the mammoth lineage migrated to higher latitudes. Writing in Nature Genetics, the scientists say that this genetic specialisation may have been crucial in allowing the ancestors of mammoths to exploit new, colder environments during Pleistocene times.