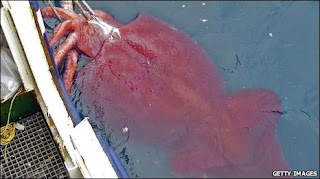 The world's largest invertebrate is not a fast and voracious predator as previously thought, say scientists. The colossal squid, a creature once linked to maritime myth and feared as a sea monster, is really a slow drifting animal that ambushes unwitting prey. That conclusion was reached by studying the physiology and feeding habits of other deep sea species and scaling up to the colossal squid's huge size. Rarely seen, the elusive ocean giant is thought to reach up to 15m long. Researchers reveal their findings in the Journal of the Marine Biological Association of the United Kingdom