WATER-DWELLING beasties abound in . Monsters and mermaids frolic and swim in our lochs and seas from the Highlands to . Some are shy, while others seem to bask in the limelight. The one thing that connects them is that they've all been spotted. They've all been recorded and noted. And, furthermore, there are people out there who believe they exist. No review of Scottish beasties could start anywhere else but with the Loch Ness Monster, or "Nessie" to her friends (and there are many of them). She has appeared in legend since the sixth century, but the building of a new road around the loch - just southwest of Inverness - in the 1930's brought her international fame. Sightings of this long, humped lady have been frequent ever since she was famously sighted in 1934 by a surgeon who had the foresight to snap off a couple of photos – and the sense to sell them to a daily paper.

Nessie's less well-known cousin is "Morag", who is said to inhabit Loch Morar, northwest of along the west coast near Mallaig. There have been fewer sightings around Loch Morar, being altogether more remote than Loch Ness. Yet when she has been seen, descriptions are very similar to Nessie. Take the most famous sighting of Morag. It was 1969 when two local people - Duncan McDonell and William Simpson - were fishing in the loch. Suddenly they saw a long creature approaching their boat at great speed. It rammed them, and fearing they were to be capsized, the terrified fisher-folk started shooting. The beast disappeared into the depths of the loch but left them with the impression that it was between 20 and 30 feet long and had three humps. Sound familiar? Well it does to Neil Bass a biologist and member of the Loch Morar Investigation Team who spotted a "hump-shaped black object" and is convinced it's another Nessie.

Across there are monsters aplenty lurking in deep, dark water. So, just what's going on? Is it collective hysteria or is there really something down there? There have been a number of theories put forward to explain the animals' existence but the current top five claim they are either:

• A plesiosaur – very similar to the above. Just substitute the word plesiosaur (a water-dinosaur) for zeuglodon

• A log – what more is there to say, except that there are plenty of trees in

• A sturgeon – biologist Adrian Shine thinks these creatures are nothing more exciting than a great, ginormous sturgeon - a freak-fish if you like

Another creature currently living in 's lochs is the kelpie, or water-horse. These watery quadrupeds wait by lochs for unsuspecting mortals. Should you ever mount a kelpie, then prepare for a watery doom, as the kelpie will canter into deep water and drown you. They can also take on human form, so should you spot a brooding man by the side of a loch with seaweed instead of hair, then you'd be well advised to run away. Fast.

The kelpie is transposed in the into the Each Uisge (sea horse), who lives in seas or lochs. If you see one, do not approach. Their fur is like Velcro and once you lay so much as a pinkie on its hide … then it's off to the deep with you. There he will devour you from top to toe, leaving only your liver to wash up on the shore as a warning to others that the Each Uisge has struck again.

Kelpies are not the only watery beasties living in . We are also awash with tales of finned people and mermaids. Finned people have often been sighted in Orkney close to their home at Eynhallow village. They are dark and swarthy with long fins, which they can cunningly disguise to look like cloaks. They are also rather modern, in that they are twinn 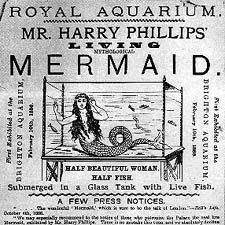 ed with the underwater city of – where they go to spend the winter.Finmen often harass local fishermen and are known to abduct local men to provide husbands for their finwomen who had a vested interest in finding a mortal husband. If they did not, they have to settle for marrying a local finman and degenerating from a beautiful woman into an ugly crone. Marriage to a mortal man ensures their lovely looks last forever.Similar to finpeople are mermaids, who have been bewitching mortals with their beautiful singing voices and exquisite beauty for hundreds of years.If documentation is proof of existence then you could be fairly assured of the presence of fish-folk in our midst. The Aberdeen Chronicle is particularly fond of mermaid sightings, but stories have appeared in the London Times as late as 1809.

Tail or tale: Did sea monsters and mermaid swim the waters in and around ?What is interesting with all the reports is the consistency of the description. The mermaid is always young, beautiful, with soft white skin and long dark hair. Surprisingly the person reporting the sighting is not an old drunk who has left his glasses in the pub, but is often an upstanding and respected member of the community.If you're beginning to think that there might be something in these fishy-stories, then you'll need to explain why it is that the mermaid is often to be found speaking Latin or singing hymns. Presumably she's been well educated at the "" for young mermaids.