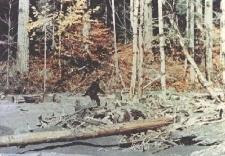 I found this as a balance to the photo claim yesterday :

FAIRFIELD -- It goes by many names: Bigfoot, Sasquatch -- the legendary half-human, half-ape creature that, according to legend, prowls the great northern woods of the and . Some insist, however, that the hairy beast is real. Sasquatch "sightings" have primarily been reported in the Northwest.Until now, that is.

A woman driving on Unquowa Road about 10:30 p.m. Tuesday called police to report that she "almost hit Sasquatch," which was standing in the middle of the road. She said it was 8 feet tall and very hairy, with a large body and "legs like tree trunks." When she switched her headlights to highbeams, she said, the creature covered its face and ran into the woods.The driver told police it was "human like," but more "like an animal."Unlike other Sasquatch sightings, where the elusive beast melts back into the deep woods, this one was located in .

Bigfoot turned out to be a big joke -- a 16-year-old dressed in a gorillalike costume, police said. The teen told officers he was standing at the intersection of Unquowa and Sturges roads, waving at passing cars while friends watched.A police officer escorted the sham Sasquatch back home and turned him over to his parents, who, the police report states, agreed he should have shown better judgment.

He was lucky no one shot at him ! lol.