More on the Sanger Bigfoot Sighting 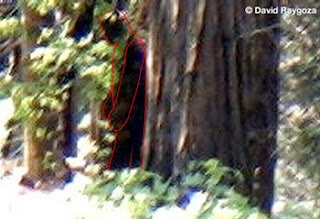 
The Bigfoot creature may have been captured on a remote trail camera placed in the , based on photography evidence released by Sanger Paranormal Society. Investigator Jeffrey Gonzalez said Tuesday night that multiple cameras were put in place in this remote area on Memorial Day weekend, and retrieved on June 7, 2009.Gonzalez said they did not immediately see the evidence, but upon closer inspection, noticed what appears to be the Bigfoot creature. Gonzalez said a group returned to the site to review the exact capture spot after many theories surfaced once the original image was released in early July. The tree stump theory was ruled out, he said, because the "dark object" is not there. Gonzalez said the bear theory does not stand up either, because the image does not have a snout on the head. "You can see features of a human face such as the nose, mouth and chin," Gonzalez reports.
"The arms on a bear, when standing, do not hang that far down. We also took measures on how high this thing was. According to the leaves and the branches that were covering the object's face, the tape measure said it was between 8 and 9 feet tall. The same camera that took the picture of the object also took pictures of other objects such as black bear and deer, which does not resemble the object in any way." Gonzales said that Bigfoot investigator David Raygoza has been visiting this location for six years after an elderly Native American pointed it out to him.
He told David that this spot in the forest was sacred Indian land and that weird things happen here. He said David has had many individual sightings and has collected footprints, but has never captured anything with a camera until now.Returning to the exact spot where the image was captured, Gonzalez said that the angle of the hill is 45 degrees, which would make it difficult for a bear to stand upright. He also said the the object is clearly brown in color, ruling out the black bear

The Bigfoot creature has been reported in many different parts of the country during the 20th century, including an "outbreak" during 1973 and 1974, primarily in southwestern, , and investigated by Stan Gordon. During that period, hundreds of Bigfoot sightings were reported as well as hundreds of UFO reports. No photographic evidence exists from that time, although Gordon collected many foot prints in that region.Aside from this single image, Gonzalez points out that there were three additional images taken several days earlier near midnight, where a bright light lit up the area. His group cannot account for how this happened, except that they are ruling out a flashlight as the source of the light in the images.