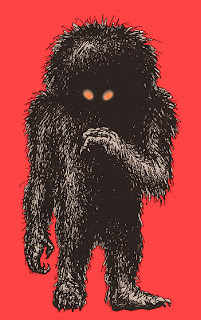 Eyewitness accounts of the " monster" or “momo” date back to 1846 when a "monsterous beast" was discovered in the swamplands near the Arkansas-Missouri border. In 1881, a creature covered in hair surprised a hunter nearby . Since then, sightings of a large, bipedal, hairy creature have surfaced in numerous counties in and have continued to be reported.

Joan Mills and Mary Ryan were driving along Highway 79 in July 1971, north of , when they allegedly saw a hairy creature that made disturbing gurgling noises. The women described the thing as "half ape and half man."

The most sightings though took place in 1972. The monster scare of "Momo," as named by the press, began in 1972 in Pike county near the small town of .

In the afternoon of July 11, 1972, 8-year-old Terry Harrison and his 5-year-old brother, Wally, were playing in their backyard at the foot of Marzolf Hill on the outskirts of , MO.. Their older sister, Doris, was inside the house. heard her brothers scream. She looked out the bathroom window and saw a black, hairy manlike creature, standing by a tree about six or seven feet tall. Its head sat directly atop its shoulders, with no visible neck. The face was likewise invisible, completely covered by a mass of hair. The creature, was apparently carrying a dead dog under its arm.

Then on July 21 Ellis Minor saw Momo outside his home on . It was around 10 p.m. when he heard his dogs barking so he grabbed a flashlight and stepped outside. He saw a 6-foot-tall black, hairy creature standing in his yard which then turned and ran. Everyone who saw the creature claimed it had a terrible smell like rotting meat.

Then mass hysteria seems to have set in .The Police received reports of a creature crossing the highway with a dog or sheep in its mouth and another witness told police that the creature lifted the back of his automobile and so on. It lasted for two weeks. Then all seems to have gone quiet. See a full story here:

The "Bigfoot Field Researchers Organization" Web site lists Momo sightings in 29 counties, including a 1976 report from . According to the report, two people were in a boat on the near Highway 40-61 when they saw what appeared to be a 6-to-7-foot tall creature covered in dark brown hair. The creature was drinking from the river when it saw the boat, stood up and ran into the trees.

So where did this creature go? Well there have been some recent sightings reported:

Location: from Bourbon Date: October 2002 .Source: Ken H..Description: While traveling South on Highway N from Bourbon, I saw a Big foot type creature cross the highway in front of me and walk into the woods.

And claims that momo has reappeared :

So was it just mass hysteria? Was it a wild man living in the woods or a bigfoot? There are similarities about the sightings including the smell and descriptions of the creature. Lots of people claimed it came in a UFO, but I think they may have been at the waccy baccy or the magic mushrooms. So another unsolved mystery and one can only hope the creature reappears so it can be followed up and researched, without the hysteria.