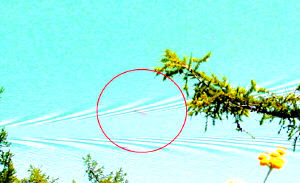 The Xinjiang's "Kanas Lake Monster" in has been in the news in previous years with hot weather so I thought I would revisit it. . is in , Altay Region of Xinjiang Uygur .It is actually the widest section of the , a tributary of the . The Erix originates in the Erix glacier. On its banks are European primeval coniferous and birch forests, creating the scenery typical of forested areas in Scandinavia and . In the lake are 8 varieties of rare cold water fish, including the huge and ferocious hucho taimen, capable of swallowing a whole duck in the lake waters. . In 1985, Xinjiang Daily carried a headline announcing discovery of giant Red Fish in the lake, saying they were 10 to 15 meters long, weighing more than 4 tons and each having a head over one meter wide. Sightings have spiked in the past few years .

On June 6th and 8th, 2004 the media reported three shocking sightings of "lake monster" at Kanas Lake and one traveller even snapped shots of the "monster". This has stirred up interest with, tourists flocking to the region . In recent years, media both inside and outside China have, in succession, reported on solving the mystery of the "lake monster", pointing out that the "monster" was nothing but a huge red fish; but this view was controverted by other experts. There is still no definitive answer to the real identity of this "lake monster".

.Then on the afternoon of June 7, 2007 (around 7:50 pm, time), seven tourists from were sailing on the , a scenic spot in Xinjiang Uygur Autonomous Region, northwest . When they stopped near Sandaowan for a photo, they suddenly spotted two dark objects, very large in size, springing out of the water, breaking a wave one meter high. They leapt forward one following the other, headed swiftly towards the middle of the lake and disappeared from sight in about two minutes. Then peace reigned again. Each of the "monsters" looked about 10 meters long, said the seven tourists, who were the only witnesses to this bizarre encounter.

So giant fish or something else? I hope someone investigates as even giant fish are cryptids in their own right. Lets see if the sun brings out any more reports
Posted by Tabitca at 04:16