Invasion of the giant jelly fish! 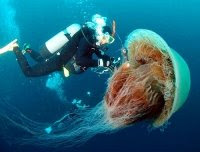 The Nomura, also known as the Echizen jellyfish, would not look out of place in a Godzilla film. They can weigh up to 200kg and measure up to 2m in diameter. For the past four summers, they have mysteriously materialised in the Yellow Sea off and the Korean peninsula before drifting across into the . Experts expect large numbers to arrive this year – which could spell disaster for Japan’s fishermen.Six adults can completely destroy a fishing net, as well as poisoning the fish inside, leaving them inedible.Fishermen are also liable to get stung trying to remove them.The last time Nomura jellyfish were seen in Japan’s coastal waters was in 2007, fishermen made more than 15,000 complains about damage done to their nets. The Nomura’s Jellyfish (エチゼンクラゲ echizen kurage, Nemopilema nomurai) is a very large Japanese jellyfish. It is in the same size class as the lion’s mane jellyfish, the largest cnidarian in the world. The width of the Nomura’s Jellyfish are slightly larger than the height of most full grown men.Growing up to 2 meters (6 feet 7 inches) in diameter and weighing up to 220 kilograms (ca. 450 pounds). Nomura’s Jellyfish live in the waters between and , primarily centralized in the Yellow Sea and . Source : http://cryptoworld.co.uk/japan-prepares-for-giant-jellyfish-invasion/