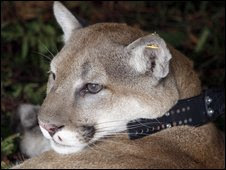 A cougar living for the past fortnight in a park in the US city of Seattle has been captured by wildlife officials and set free in the wild. The big cat was caught about 0240 local time on Sunday (0930GMT) after it was spotted by an employee at a cultural centre in Discovery Park. Tracker dogs chased it up a tree and a wildlife agent tranquilised it. Two live traps had failed to lure the cougar, forcing the popular park to be closed for days. The 534-acre park, the largest in Seattle, Washington state, was re-opened on Sunday. Captain Bill Hebner of the Department of Fish and Wildlife said the two-year-old animal was in good health, the Associated Press reported. The cougar was driven to the Cascade foothills near Skykomish, about 45 miles (72km) north-east of Seattle, to be released. "It wasn't aggressive or stalking people, and it maintained its natural respect for the wild," Capt Hebner said. He added that domestic cats were likely to have been its food during its time prowling in and around the park, as well as rabbits and other small animals. A global positioning unit attached round the cougar's neck will send twice daily updates about its location, park officials said. After sightings last week, the state Department of Fish and Wildlife set two traps, one involving a cage covered with brush and ferns and baited with dead fish and elk liver.