This article about a possible Pterodactyl sighting is interesting but looking at the photo it just looks like a fat goose or wading bird caught in mid wing flap . Maybe I am just a cynic or have no imagination? lol

The object, photographed by a fisherman near over an artificial lake called El-Nihuil, was, according the the newspaper Los Andes, witnessed by more than one person.

Mr Pino, 44, from , fishes on the lake and told Los Andes that he often goes down to the water to watch the swans. On Saturday last we 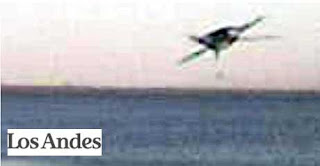 ek, however, he noticed a strange object hovering over the lake and took a series of photographs on his mobile phone.He said: "I was excited and I do believe life must exist on other planets."

Shortly after Mr Pino approached the newspaper, a second witness - Christian Figueroa - claimed that he and his father saw the object while travelling past the lake in a bus. "We froze (with shock)," he said.Mr Rafael also told Los Andes that he had noticed several strange phenomena in recent months in the area. He described an incident when a range of hills around the Atuel river were illuminated by several bright white flashes which he did not believe were caused by lightning. He described them as similar to very powerful camera flashes.Members of UFO and cryptozoology communities are both claiming ownership of the object with some saying that it could be an unknown creature or a Pterodactyl - a flying dinosaur that last lived on Earth 66 million years ago. Source :

I saw a huge bird like that in Pensacola Fl, in 1995. I was having a yard sale so I was in driveway at 5am. The thing was huge had like a 20ft or bigger wing span. I certainly wasnt sticking around to take a picture, I ran screaming into the house