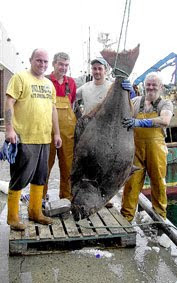 You should see the one that got away...

THIS is the one that didn't get away - a fisherman's tale of a gigantic 167lb fish captured by a Moray crew. The huge halibut was caught by the Lossie-based trawler, 'Maranatha', in the and landed at Kinlochbervie, to the astonishment of local residents and holidaymakers. Everyone wanted their picture taken with the massive catch, which hit the scales at 76kg and earned the crew almost £400.Skipper William Fraser said it was one of the largest halibuts he had seen in more than 40 years at sea, but lamented the fact that he did not manage to snare a second monster of the depths."They used to say that these fish came in pairs because they mate for life, so nine times out of ten, if you catch one and stay in the same area, another one will come along," said Mr Fraser. "But there was no sign of this one's partner. "It's not very common to see one this big, though, and it's certainly the biggest I've seen since I was about 18," said the 56-year-old, who lives in the town's . Mr Fraser - who also works as a crossing patroller in Moray - skippers the boat time-on, time-off for owner Neil Rumbles.The fish was caught near the islet of Rockall and taken ashore at Kinlochbervie, where it became something of a celebrity."There were a lot of tourists there, and it created quite a bit of interest," said Mr Fraser. "There were kids hanging onto it, wanting to have their photo taken."The prize catch fetched £380 at market, and will provide countless fish suppers for the restaurant which bought it.