The Controversy around the Irish Lake Video shot by CFZ 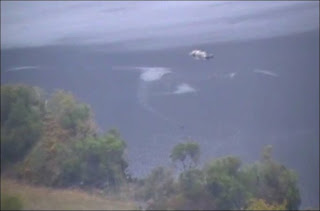 The Irish lake video appears to have started a controversy. In case you missed it here is a news paper report about it:

SCIENTISTS believe this incredible footage could show a mysterious monster lurking beneath one of the deepest lakes in the . Jonathan Downes, 50, spotted the "creature" thrashing around in one of the Lakes of Killarney in , while on holiday last week. His eerie sighting was in the one of three interlinked lakes that make up the area. The mystery comes just a few years after bizarre unexplained sonar recordings showing a large body were made in the adjoining . Along with his wife and friends who also had cameras, Mr Downes, from Crediton, , managed to capture shapes moving across part of the lake. Mr Downes, who is director at the Centre for Fortean Zoology, said that he had heard of the sonar reading before visiting the lake, but was "ridiculously" lucky to see anything. He said: "I was actually there with my wife and a friend on holiday. "All I knew is what I've read and having spent an hour on Thursday night looking down on it. "What we saw was a thing about nine to 10ft long. "I'd love to say I saw long necks and humps and things but I didn't." Mr Downes, who studies cryptozoology - which investigates unknown species of animals, described seeing what he see described as appearing to be "a long thin eel-like creature appearing about 10ft long". "I believe it must be a large eel," he said. "It was a pale colour. "What I saw didn't actually really come out on the picture as well." Pat Foley, deputy regional manager of National Park and Wildlife Service, which oversees Killarney National Park, said that there has been some unusual readings taken about six years ago, which indicated an unknown figure in Muckross Lake. "I think it was about 2003 there was a survey taken," he said. "They were getting some sort of strange picture coming back. "The image was a large and dark blob which I presume, for economic reasons, was described as a monster." The Lakes of Killarney have much in common with Loch Ness - home of the world's most famous monster - just across the Irish Sea in Scotland. Both are large very deep lakes with similar fish species including Arctic char. Loch Ness is the deepest lake in , whilst measures up to 70m deep, is along with Lough Leane, 's deepest lake. At the time of the sonar findings in in Paddy O'Sullivan, manager for the National Parks and Wildlife Service said: "I am very excited by these findings and am delighted that the ancient fish community of these lakes are being examined by the Irish Char Conservation Group and scientists from around the world. "These interesting findings can only be good for Killarney from a public awareness and a tourism point of view. "Whatever the thing turns out to be it will be afforded our fullest protection under EU law as the Muckross forms part of a Special Area of Conservation." Source:

This is not the first report by an organisation of a large creature in the lake- see this from Jan 2004:

Lough Ree may have been the first lake in to claim it’s own prehistoric monster like that of Loch Ness in . However Muckross lake in Killarney, Co. Kerry is turning up a mystery of its own and it is no swimming leprechaun. Recent scientific evidence indicates that very large and mysterious “thing” lurks beneath the tranquil surface of Muckross lake. Although the jury is out on what exactly this strange USO or unidentified swimming object might be, parallels are already being drawn with the famous Loch Ness Monster. Measuring over 20m or sixty feet in depth, and almost 80m in length the object or creature has scientists baffled. For almost a year now, Irish and international scientists have been working with the Irish Char Conservation Group to find out more about the fish life in the Ice age lakes around Co. Kerry. They carried out the first fish survey ever in last September and identified the presence of the important rare fish called the Arctic char. This finding is of interest in itself but when they recently analysed data collected by new hydroaccoustic or sonar gear in April of this year they were completely taken by surprise. Hydroaccoustic surveys basically beam sound into the water, some of this sound bounces back from fish, other aquatic life or the lake bottom and is picked up by a receiver which logs the information. This data must then be examined using sophisticated computer software. “It was when we started to examine the recorded signals that we noticed something very unusual was going on in one transect logging. Instead of the normal small signals indicating individual fish which we always get during our surveys, we got something the size of a two story house in 20-25m of water along the south eastern portion of the lake. We have been unable to identify what exactly the image is, but we know that it is not a computer or logging error as the gear was functioning normally” reports Andrew Long specialist fisheries consultant with River Monitoring Technology Ltd.

The original video and comments from The CFZ team and others can be seen here:

John Downes and his fellow researchers who shot the video have been abused and ridiculed by some. This is why nothing ever gets discovered or concrete evidence produced because most of the cryptozoology community are too busy being self important and wanting to be the only one whose opinion is valid. They ought to stop and take a long hard look at themselves, these critics , and think about where they are coming from. If they stopped preening them selves for a moment they might see the damage they are doing. I am not saying they have to be totally open minded about everything that comes along, after all if a mind is completely open stuff falls out, but having a totally closed mind to anything but your own opinions is worse. A closed mind is like a steel trap and will ensnare you just as easily. Any new evidence or sightings of possible cryptids is exciting and should be viewed as needing investigation and not just dismissed. Whether the phenomena in the lake turn out to birds , waves or unknown creatures, a lot is still learnt from it. If it is some thing explainable then in the future we will know to remove it from the equation. To send abusive messages to Jon Downes and his friends /colleagues at CFZ is unforgivable and should not be tolerated in the Cryptozoology community, sadly however some of those messages of criticism came from so called leading lights in cryptozoology. The internet also means cowards can remain anonymous and post abusive remarks and get away with it. Jon Downes is an honest person and he filmed something in that lake. Whatever it turns out to be , as evidenced by his comments on the CFZ blog, he will be quite willing to have the film scrutinised and evaluated and listen to reasoned debate. That shows to me he is genuine. When people refuse to produce negatives or allow films to be examined that is when you hesitate to believe. Unfortunately the lesson learnt from this vitriolic back lash means less people will be willing to come forward with photos or films for fear of being treated in the same nasty fashion. I hope the protagonists read this and are ashamed but I doubt it some how.

Some blogs on Irish :

Thank you. I felt it needed saying. If I get a load of abuse because of it- well that just will prove what I have said.