is a popular recreational lake located 20 km west of Parksville, . It’s size is 477 hectares and it’s elevation 184 metres. It has Fish Stocks of Rainbow Trout, Cutthroat Trout and brown trout and Kokanee Salmon. Myths persist about . One was that it is bottomless, another that is 1300ft deep however it is 240 ft deep. There are supposedly underwater tunnels to Horne lake. The lake does not freeze in the winter. People have reported seeing what they describe as a creature in

In 2004, a woman and her father reported that they had seen a very large, long black creature in . The animal swam along the lake near Highway 4 and the two were able to see it from their car until the highway veered away from the lake.

In 2007this was reported : Bridgette Horvath ... says she saw something very odd in the water when driving 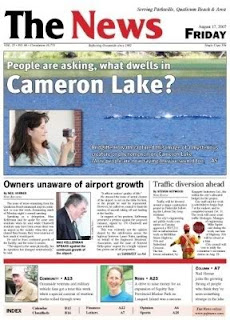 by the swimming area recently," ...
"Horvath said she was driving past the lake with a friend on the afternoon of July 30 when she noticed a strange wake in the water. There was no boat making the wake, which she said appeared to be made by something large under the water.
"She pulled her vehicle over and got out to look.
"In all, she said, there appeared to be three objects or creatures in the water.
"'They were going in a circle, like when whales school up fish,' she said.
"Horvath is mystified, but, says resort owner Louis Verheyen, this was not the first sighting of something strange in " ...
"'A couple of weeks ago someone said they saw something that looked like a row of car tires or something. Another time, a guy was fishing and he said he saw something really big on his depth sounder. It scared him and he left.'" Source:

In 2008: - After leaving church in this past Sunday, Sonny and Muriel Knapp went for a drive to . As they passed , Muriel spotted something in the water, describing it as a five metre log, slender, headless, swimming eel. Unable to pull over as they drove past Angel Rock, her husband Sonny slowed to see the creature and echoed Muriel’s description. Other people have also reported seeing something strange on . However, the people who live along the eastern shore of dismiss the sightings as the wakes from boats. They admit they don’t want increased tourist traffic disturbing the lake’s serenity.

Then I came across this on a fishing forum.(It is amazing what you find on fishing and diving forums and site. There are often reports you don’t see elsewhere):

I have actually seen it up close twice, both times about 50' out, when I was 16. We were in a boat on both the times. Family friends have a cabin on the lake there and we were out tubing one afternoon. It wasnt very nice out, fairly calm tho. I was driving the boat and remember seeing this large round snake like creature 'crest' out of the water. All I saw was I guess the back end of it. It was like seeing the last part of a whale or dolphin when it sounds after taking a breath. There was a large fin on the side I could see about the size of my hand(now at 25). It was dark-greenish and smooth looking. No tail, that I saw.
The first time I saw it, it was out roughly on the other side of the first river mouth that you drive past heading toward Port from Coombs. Maybe 100-125' off shore. The second time I saw it was when we were taking the boat to go cliff jumping closer to angel rock, but again on the cabin's side of the lake. Didn't see any fins this time, only the same color and shape and same action as before. The second time it was closer to shore but it is really deep around that rock ledge which is why we were jumping from it. Source:

So is there a large creature in the lake? Well this comment is interesting:

Cameron Lake is an ideal spot for swimming and fishing, as well as sail boarding, due to a wind funnel created by the surrounding mountains

So some sightings could be the result of wave formations. As there are large fish stocks in the lake it is possible a large eel or predatory fish is living there. As always investigation may turn up some evidence. I believe there is an expedition from the British Columbia Cryptozoology Society heading that way this month.

As you were too cowardly to leave a name mr anonymous I can only reply- what evidence have you got to the contrary....please produce it!
It seems people who leave bad comments are always too cowardly to identify them selves. Have the courage of your convictions....or is it that you have nothing to back up what you are saying and just want to cause trouble. In that case -Grow up!

it is a glacier fed lake, that water is always around freezing temps, what exactly COULD live there?

The latest report from the expedition is here:http://news.yahoo.com/s/livescience/20090922/sc_livescience/cammyanewcanadianlakemonster

all the lakes that report lake creatures seem to have the same temperatures . Loch Ness like Cameron lake has a constant low temperature. Eels and fish can survive in arctic waters , for example Arctic Char, so there is no reason why something shouldn't be living there. I feel a large fish or a very large eel is most likely.
Thanks for the comment.

Your news link is invalid ... and so is your evidence ...

sounds like a travel-tourism hoax if I've ever heard one...

why do people who leave derogatory comments always remain anonymous? get some guts and name yourself then I might answer.
I really despise people who don't have the courage of their convictions and attempt to derail other people's blogs with anonymous comments.

My wife just saw it going to Port just before Angel Rock. Unfortunatley we did not get a Pic. Aug. 2011. She described it just like the picture.

I've been to this lake and live about 1/2hr away. A co-worker was just telling me in the 70s both lanes of traffic were stopped to allow a huge snake to cross the road and go into the lake. He said it was over a foot in diameter and 16 feet in length. Ewww. Creeped out.

I saw the creature this summer. I was swimming on the beach side by the highway with my 8 year old. I seen something bug swimming towards me and at first I thought it was a Rock, but as it got closer I thought that it was some extremely rude snorkeler swimming close to me until I realized it couldn't be human. I freaked out and started saying to shore, I grabbed my son and he seen it too. He described the monster to me exactly even though I didn't tell him what it looked like. It has a smooth salamander head light green like the rocks. Terrifying. I didnt know about the monster until I googled it. I straight up saw it.

Lozen osecap, that's interesting. May I interview you about your sighting? I'm a local BCSCC researcher in B.C. who is interested in lake creature reports; here's my email address if you'd like to contact me: cryptidbraden@mailfence.com

Your sighting sounds remarkable. Let me know if you're interested. I'm open during weekends.