News of Chupacabras in Santa Fe 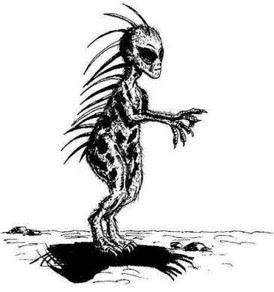 The discovery of mutilated calf in a field near () caused renewed panic among local residents, who believe that the mysterious Chupacabras is on the move again. Thus, after several years without showing itself, the famous rural legend regarding the “monster” that feeds on cows and other animals returned to the headlines. This new case occurred in recent hours near the locality of , in the heart of the province, where a local farmer came across a mutilated calf. “No traces of blood were evident. It was clean, really clean,” said the man, an experienced farmer. Bemused, the local said it was hard to describe the condition in which the animal was found, although he did furnish some details.”There were no visible traces of blood. It had perfect, smooth incisions, like someone running a finger along the edge of a plate. It was also missing its intestines, a kidney, its stomach, and its abdominal cavity was likewise empty,” he claimed. Due to this incident, other cities began reporting their own cases, which will be looked into to ascertain their truthfulness. The deaths of three more cows are being investigated in the town of . These animals displayed similar injuries. While removal of reproductive organs in these animals have been reported, they were associated from the start with this phenomenon, although SENASA concluded that these mutilation were performed by foxes and the “red muzzled mouse”