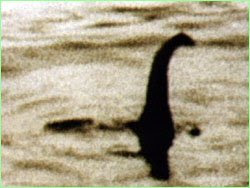 In April 19, 1934: Colonel Robert Wilson, a surgeon, was driving along the north shore of Loch Ness early in the morning when he noticed something large moving in the water, so he stopped and took a picture of it. For sixty years this picture was regarded as one of the best pieces of evidence of Nessie’s existence
It is 75 years since the so called "surgeons' photo" appeared in the press so a repeat of the details of the background to the story of it being a hoax are below.