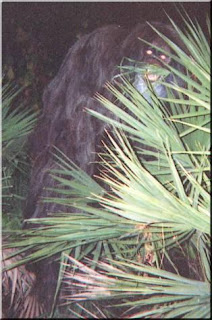 There are lots of reports of smelly cryptids. The Skunk Ape is the one that springs to mind immediately.
Skunk-apes are hairy humanoids sighted in many areas of North America, but especially in swamp areas ,and the consistent characteristic ascribed to skunk-apes is the smell. It is said to be an extreme odor that is nauseating. see report below:

Skunk Ape: Area's own stinky Big Foot -Something stinky in the swamp

It supposedly hides in muddy, abandoned alligator caves, thus the smell. For more than two centuries, people have sworn they saw it dash across the Everglades or retreat from a rural road.In Palm Beach County and the Treasure Coast, barking dogs, petrified security guards and bug-eyed kids bear testament.There are photographs, grainy and distant, but attested to by their bearers. More than 75 sightings were reported in Florida in the past two decades. The scare had started when an amateur archaeologist claimed he'd seen the thing in southwest Florida's Big Cypress Swamp.But it was concentrated locally in the 1970s, when South Florida then had more open space and about half the people it does now. A local dispatcher said he was advising lawmen that locals were so jumpy the cops should identify themselves when they approached homes."I know it exists," Palm Beach County Sheriff's deputy Marvin Lewis said in 1980.He said he and fellow deputy Ernie Milner made some 50 forays to the wild. They said they shot something in 1974 west of Lantana that grunted and fled back to the dark. Another time, they found mysterious hair on a barbed-wire fence. Lewis put in 27 years and retired in 1997. He hasn't changed his mind. He said recently that any along the coast were long ago driven west by encroaching civilization."I couldn't point to a photo and say, 'That's what I saw,'" he said. "But cops act on investigation and evidence. And the evidence says something was

The Guiafairo of Senegal is described as a giant bat that is very smelly and even sea creatures have been described as stench making.:

Seen in Burra Haaf – In Waters in the area in the 1900s
Several reports of a creature with a sail-like body and a flipper on the end of its nose exist in this region of water off the Shetland Isles. A fishing crew who encountered it stated the beast destroyed several of their nets, and came so close to their boat they could detect a pungent stench.

So what is it with smell? Well all animals smell to us, the odour of wet dog or wet cat is pretty bad. But if smell is an indication a cryptid may be near, it is a good tracking device and should perhaps be one that should be taken more seriously. Next time you smell something awful, when out in a boat , or in the countryside, investigate it, it could be something cryptozoological is passing that way.