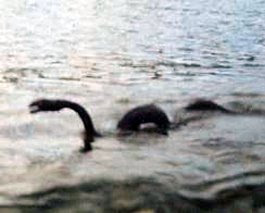 In the absence of any breaking news in the crypto-universe thought I would look at ,as far as I know, Ireland's most famous lake monsters.


Rumours about a sub-aquatic monstrosity in Lough Ree have been around for many centuries.. The Life of Saint Mochuda mentions it, helpfully adding that it had devoured a man. Lough Ree was also reputed to hide an underwater city complete with a cathedral. It is said that a bishop once tried to visit it and never returned.Interest in the Lough Ree Monster was rekindled in the 1960s, by respectable men of the cloth. Several churchmen saw "the monster" - Father Quigly, Father Murray and Father Burke, fishing off Holly Point.

What the priests allegedly saw, is recorded by Peter Costello in his book ;Search of Lake Monsters: "It was moving... It went down under the water and came up again in the form of a loop. The length from the end of the coil to the head was 6 feet (1.81m). The was about 18 inches (45cm) of head and neck over the water. The head and neck were narrow in comparison to the thickness of a good-sized salmon. It was getting its propulsion from underneath the water, and we did not see all of it".

A sketch is supposed to exist, which shows two objects breaking the water, one is a hump, the other a long neck-like protrusion. This report was not the first and over the previous 30 years, several anglers claim to have been towed by a a strong unseen creature until forced to cut their lines. Other witnesses are mentioned, but nothing on par with the sighting of the three priests.

Colonel Harry Rice, in his 'Thanks For the Memory', wrote how a friend had seen the creature some eight years previous and had described it as looking "for all the world like a dozen barrels of porter strung together"

In June 2001 an expedition of the Global Underwater Search Team tried to get to the bottom of the monster stories through surface monitoring and a dropping a hydrophone into the water. The evidence recorded was inconclusive and consisted of a "peculiar sound" and a small object swimming in the lake.

Another strange creature of the Irish lakes is the Dobhar-Chu of Lough Mask. Also called the dobarcu or dhuragoo, this "water hound" has been reported to attack people. It is described as sort of looking similar to a large otter, white in colour with black ear tips and black across the back. It is said by some to look like "half wolfdog/half fish".There was a report in 1684 of it attacking some one and leaving the water all bloody.

Lake monsters or strange lake dwelling creatures are reported all over the world. There are surely too many to be a coincidence. The sightings may be simply of large eels or fish but the similarities between many sightings in different parts of the world suggest something is going on .