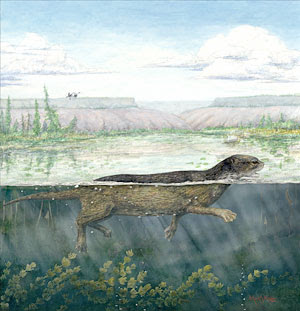 A new fossil find, called the missing link in evolution between seals and walking animals is now on display.The fossil was found in the summer of 2007 during a fieldwork expedition on Devon Island, Nunavut, in a meteor impact crater. The new animal, a carnivore named Puijila darwini, has a body resembling that of an otter, but a skull that is more closely related to seals. A "walking seal", Puijila had legs like a terrestrial mammal, but the feet were webbed and adapted for swimming. This surprisingly complete skeleton (about 65%) is the most primitive pinniped skeleton found so far."Puijila is the first fossil evidence that early pinnipeds lived in the Arctic," explains Rybczynski. "This discovery supports the hypothesis that the Arctic may have been a geographic centre in pinniped evolution."Rybczynski co-authored the report with Dr. Mary Dawson, Curator Emeritus of the Carnegie Museum of Natural History in Pittsburgh, and Dr. Richard Tedford of the American Museum of Natural History in New York."Puijila" means a young sea mammal in Inuktitut, the language of the Inuit people in Nunavut. The species name "darwini" pays homage to Charles Darwin, who predicted this transitional land-to-sea animal in On the Origin of Species. This year marks the 150th anniversary of this seminal work. It is approximately a meter in length, and possessed only minimal physical adaptations for swimming. Unlike modern seals however , it did not have flippers and its overall form was more otter-like.It is on display at the Canadian Museum of Nature in Ottawa, Ontario.

P.S. Hello to Ellaenchanted. thanks for following x