Report on the Yowie 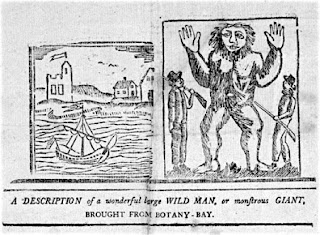 In , there are have been almost 10,000 'reported' sightings of an ape-man like creature, called a Yowie. During the early colonial era, Australian Aborigines often warned British settlers to beware of an ape-like creatures that lurked in the mountains and deep forests of the continent. .

The first official reported sighting of the creature by a white man was reported in 1790 in local Newspapers in a town now known as . During the 1800's numerous reports followed through out the country. The creature was described as an ape or an ape like man .The earliest known Southern sighting was reported in 1849 on , . It states that several people had observed a creature, which was 6-7ft tall that resembled a half Baboon - half man. Across the boarder in at approximately the same time during the 1840's, reports were hitting the newspapers about the Aborigine's telling their stories of the "Narcoonah" (Yowie) which lived in their area. In in the 1800's, three men on expedition told of their meeting with a Yowie , which resembled an ape. Then in April 1871, a man named George Osbourne saw an ape like creature amble down a tree and scared his horse.

There are said to be at least two types or species of Yowie The large Yowie is normally between 6-10ft and the smaller variety that is roughly 4-5ft.

There were a set of reports arose in the 1970s following the sighting of some large (too large to be a human), humanlike tracks by an Australian Air Force surveying team on . Then in the late 1970s Rex Gilroy founded the Yowie Research Center and now has over 3,000 sightings documented . Rex Gilroy, an expert on the Yowie , an expert on the took plaster casts of footprints in . He said sightings on the Newell Highway go back to the 1870's with newspaper reports of a creature seen by a government wagonette driver.Two years ago a group of tourists found giant apelike footprints in road side bush, similar to experiences in recent months of truck drivers in that area. More recently Rex Gilroy received a report from a motorist who has stopped his car for a rest and sighted a hairy apelike creature about 10 feet tall watching him from nearby bush. Mr Gilroy says similar reports have come from Lismore and Kyogle areas on the NSW north coast. A farmer riding a horse saw a man sized hairy creature in jungle a few miles from town. Another farmer was approached by an apelike creature bigger than a man while exploring mountains near Lismore. On the Gold Coast a hiker saw a 12 ft creature in a rainforest watching him from trees outside Nerang.

Territory Yowie researcher Andrew McGinn yesterday told the Northern Territory News the dog's death - in which its head was ripped from its body - could be the work of the Bigfoot-like beast.But Tim the Yowie Man, a former economist who turned his hand to Yowie research after spotting a hairy beast on a bushwalk 15 years ago, said he was concerned the Yowie was being incorrectly portrayed as an aggressive creature.

"In over 150 years of Yowie reports all over , I've never heard of a Yowie ripping an animal's head off," he told The Northern Territory News."To speculate, with a lack of conclusive evidence to back the claims, that the decapitation of this poor puppy was the work of a Yowie is alarmist." April 2009

Some sites of interest :

"The first official reported sighting of the creature by a white man was reported in 1790 in local Newspapers in a town now known as Sydney."