connection between big cats and UFOs? 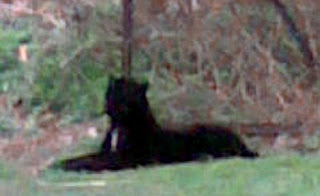 Shropshire has reinforced its reputation as home of the weird and wonderful after a new spate of big cat and UFO sightings.Investigators say the county is among the top 10 locations in Britain for bizarre happenings.And reports from Shropshire Star readers are still flooding in.The latest big cat sighting was reported by 89-year-old retired farmer Stan Hulme, of Preston Gubbals Road, Bomere Heath, near Shrewsbury.He said he saw what he described as a “big old cat”, much bigger than the average feline, prowling around in a field near Myddle Hill yesterday.“It was just going across the field,” he said.“To start with I thought it was a sheep but there was nothing else in the field. I watched it for a while but I wasn’t worried. It was bigger than a dog but smaller than a sheep and was happily walking around and didn’t seem frightened. It’s an amazing thing.”The Big Cat Society has investigated previous sightings all over Shropshire, with Telford being a particular hot spot.Meanwhile, the Shropshire Star has also received several reports of unidentified flying objects from callers.It follows a story in yesterday’s paper about pensioner John Ward, of Woodside, Telford, who spotted five strange lights near Wrekin Retail Park, Wellington on Saturday evening.Trish Fryer, of St Georges, Telford, and George Cooper, of Knockin, both got in touch to say they had seen unusual bright lights in the sky.

CLAW marks could be evidence of the latest sighting of a mysterious black panther thought to be prowling East Anglia.Shaun Baxter, a father of one, said he spotted the big cat gouging out the markings while he was shooting rabbits in a field just off Bacton Road between North Walsham and Edingthorpe in Norfolk on Sunday afternoon. He said: “I was standing next to a tree in my camouflage gear and about 70 yards away was a big black panther-like cat. “It was scratching on a tree, like a normal household cat would do at its scratching post.”Mr Baxter, a house husband who lives in Bowthorpe, near Norwich, said the scratches were too high off the ground and deep to be made by a domestic cat or dog, and the creature he saw was easily bigger than a husky dog.After the cat pounced off into thicker trees nearby, Mr Baxter, 42, waited 20 minutes while he plucked up the courage to have a look. He said: “My heart was thumping. I couldn't believe the marks on the trees.”This is the latest in a spate of sightings across the county of a black panther. So far this year the mysterious creature has been spotted in Hevingham, North Elmham and Aylmerton, as well as a sighting in Hellesdon, north of Norwich.

This again was followed by reports of UFOs. Is there a connection? doubtful and any sightings at the same time are probably just coincidence.Unfortunately Big Cats being linked in this fashion with ET, does nothing for their credibility, which I think is a great shame. Of all the cryptids, the big cats are most likely to be found.

http://www.cryptomundo.com/cryptozoo-news/megamouth41/ news of capture of megamouth shark with photo.