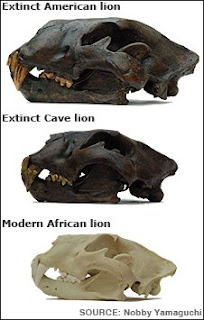 Giant lions were roaming around Britain, Europe and North America up to 13,000 years ago, scientists from Oxford University have found.

Remains of giant cats previously discovered were thought to be a species of jaguar or tiger but after DNA analysis they were proved to be lions. They were 25% bigger than the species of African lion living today, and had longer legs to chase their prey.hey would have lived in icy tundra with mammoth and sabre tooth tigers. It is thought these animals would hunt over longer distances, and their longer legs would help them chase down their prey as opposed to the modern-day species which tends to ambush its victims. The Oxford team analysed DNA from fossils and other remains gathered from Germany to Siberia, and Alaska to Wyoming.

Dr Ross Barnett, who conducted the research at Oxford University's department of Zoology, said: "These ancient lions were like a super-sized version of today's lions and, in the Americas, with longer legs adapted for endurance running. "What our genetic evidence shows is that these ancient extinct lions and the lions of today were very closely related.

"Cave art also suggests that they formed prides, although the males in the pictures would not have had manes and they are depicted very realistically." Lions appear to have been very important to early man with many depictions of them in their cave paintings, as in seen in the pre-historic cave complex at Chauvet in France. Other archaeological finds in Germany include figurines which are half man, half lion, leading to the theory that lions may even have been worshipped by ancient humans. The team found that these remains from the Pleistocene Epoch (1.8 million years ago to 10,000 years ago) could be divided into two groups: the American Lion which lived in North America, and the Cave Lion which lived in northern Europe, Russia, Alaska and the Yukon. These ancient cats would have lived in an environment that was more like an icy tundra and would have shared their habitat with herds of other large animals such as mammoth, woolly rhino, sabre tooth tigers and giant deer. About 13,000 years ago these species died out in a mass extinction. Figuring out the reason behind this, Dr Barnett said, was one of the last great scientific mysteries. He said: "There are a couple of different schools of thought. It could have been climate change or something to do with humans. Humans could have been killing off their prey or killing the lions themselves.