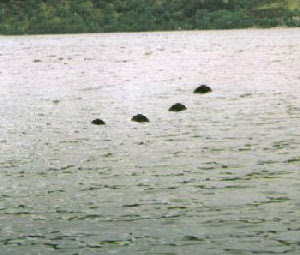 There are apparently two Lake Murrays with monsters. The first is in the USA

Lake Murray in South Carolina is 41 miles long and 14 miles wide more than 380 feet deep.The monster nicknamed Messie was first seen in 1933 when residents of Irmo and Ballentine saw what they described as a cousin of the Loch Ness Monster. Over the years people from all walks of life, military personnel, doctors, police, lawyers and ordinary people have reported seeing something in the lake. The sightings appear to fall into two categories, large fish and serpent like creatures. In the large fish category, some believe it could be a sturgeon or a catfish.

It is also said to be aggressive as this report shows:

Buddy Browning, his wife Shirley and their friend Kord Brazell were fishing on the lake back in one of the coves when the monster charged them. Buddy Browning said "We noticed something coming out of the water at us. It attacked our boat! It wasn't an illusion, it wasn't an eel or sturgeon. It was unlike anything I ever saw before, and I have been fishing Lake Murray for over 20 years. We never did ever figure out what it was. It was not an alligator. . No! I know alligator when I see it! "It was very aggressive. It came towards the boat like it wanted us to leave. Whenever we came up to near where it was nesting or doing whatever it was doing, it just came up to us. It could've been mating. It was basically on top of the water where you could see it quite well. And leave is exactly what we did. "I'm not sure if it was a sturgeon, though. I've never seen it since. I did come back that day. Kord and I came on back over here to the house and got the shotgun. We was going to go back after it and claim it! But we never did see it again." Shirley Browning said "It tried to climb into the boat. Buddy beat it off with a paddle."

And an unidentified caller to radio station WNOK FM 104.7 in October 1996 reported: "I was fishing on Shell Island, off of a friends cove, and I saw a fin that was about two feet long come up. I thought it was a big bass, but I didn't know what it was, so I threw my line right out in front of it. It broke my rod in half and took it with it! All I had left was just the handle grip! That's all that was left. I didn't know what it was. . . all I know was it broke my rod in half! Just after that, I saw it roll, but that was it."

Sightings of a super-sized fish or unexplainable creatures continue today. According to Fort Jackson U.S. Army General (retired) Marvin B. Corder, it's home to something far more sinister than a big fish. In a 1990 letter to the South Carolina department of Fish, Wildlife & Parks, Corder said he and his son have seen something in the waters not once, but twice. "This serpent-like creature is 40-60 feet long with the head and body resembling a snake, with a tail of an eel."

The last documented sighting occurred in September, 2002. The local Wildlife and Fisheries Department have suggested it may be an Alligator Gar, a large fish with sharp teeth. Maybe it is a large aggressive eel , sturgeons aren’t known for attacking people.

It has it’s own site :http://www.lakemurraymonster.com/

And the other Lake Murray monster is in Papua New Guninea:

June 11, 2001—Lake monster sighted in Papua New Guinea. This year, two accounts of a sighting of a lake monster in the Lake Murray area of Papua New Guinea have come to light, reported in the first instance in Papua New Guinea’s Independent newspaper, and relayed by Creation magazine. First account: On December 11, 1999, villagers travelling in a canoe reported seeing a ‘dinosaur-like reptile’ wading in shallow water near Boboa. The following day, a Seventh Day Adventist pastor and a church elder say they saw the animal not far from the first sighting. The creature is described as having a body ‘as long as a dump truck and nearly two metres wide, with a long neck and a long, slender tail. It was walking on two hind legs ‘as thick as coconut palm tree trunks’ and had two smaller forelegs. The head was similar in shape to a cow’s head, with large eyes and ‘sharp teeth as long as fingers.’ The skin was likened to that of a crocodile, and the creature had ‘largish triangular scoops on the back.’ The second account: In June, 2000 a visitor to Irian Jaya (Indonesian side of the border with Papua New Guinea) heard an account from a missionary who said that the locals told stories of a large beast. When one of the missionaries took a book of dinosaurs, and showed it to them they pointed out in the book the creature they had seen. The report did not say which dinosaur was identified.

I tend to have my doubts about any news from the creationists reports and I have been unable to find out anymore about it. If anyone knows more please leave a comment.

Interesting and alarming all at once. Especially since the account in New Guinea comes from an SDA minister. These are very staid people, not lunatic fringe religionists. Just that alone leads me to the conclusions that the New Guinea sighting is real. What is really curious is why these seemingly prehistoric creatures are back. Has the inner regions of the Earth warmed enough to hatch dormant eggs? That is my suspicion because we don't know what the climate on Earth was really like when the dinosaurs roamed it.

Thank you for your comment.The climate when dinosaurs roamed the earth was much higher in oxygen I think . It is unlikely eggs will have survived, they would have been fossilised. It is more likely that it could be a creature that has evolved and is unknown to modern science. The world dinosaurs lived in was so different from our own that they would have problems coping with the pollution in the air and the water, without changing.Dormant eggs hatching out is a great idea though,but I don't think any eggs would have survived that long, sadly.

I grew up in Papua New Guinea in the Madang province. The tribe that I lived in talked of a dino-like creature that used to live in that area and eat dogs, pigs and small children. They drew a shape in the ground and it was not a croc but looked like a dino. They said it also ate vegitation. They hunted them to extinction in that area because they were so dangerous. That would have been in the 1950-1960 time frame. The area is so thick with vegitation, it wouldn't be hard for dino's to survive. We have seen some incredibly big lizards that the people take for granted and don't fear. One was over 6 feet long. If they fear something, it is worth being afraid of--they are warriors and very tough people.

I seen it and I have a video of it